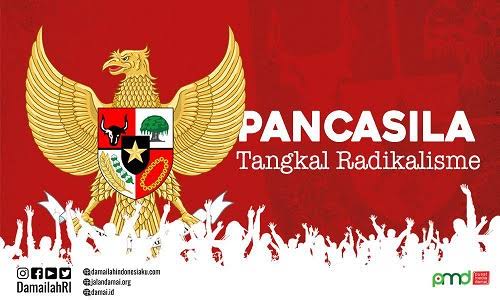 Understand radical is the idea of a dangerous virus , s ehingga this requires serious attention in order not to spread to the community. One way is to foster a sense of nationalism. Starting from state defense education, Pancasila to the culture in the Republic of Indonesia.

In this social media era , of course anyone can be easily influenced or influence others. Especially with new things such as interpretation of verses which are packaged to corner certain groups.

Middle East Political Observer from the University of Indonesia Smith Alhadad said, the level of welfare of the Indonesian people had declined. This is what causes people to flock to go to the Middle East countries that are considered rich countries.

According to him, it is this misconception that drives the public to join the radical ISIS organization in the hope of getting a better economic income.

Brainwashing carried out by ISIS-was spelled out very extreme , because some citizens who had flown to Syria chose to boa kar passports in his. If you have this, of course they are reluctant to return to the country which has a variety of cultures and upholds democracy.

Even though radicals do not agree with democracy, radical groups instead use political narratives. Ana k-young people who are in crisis of identity or feel upset because he saw injustice, will easily encouraged to commit jihad.

The next factor is easy internet access that is getting faster. Especially young people who are easily upset tend to rely on the internet to get information that is unstoppable.

Whereas ISIS, at that time was optimizing the internet to spread ideology and recruitment through the spread of jihadist videos and their understanding that was not in line with the P Ancasila.

Worse, they will use psychological narrative that mengglorifikasi figures of violence as a hero or a mujahid . In short, they will gently spread narratives that assume that violence can be a solution in solving problems.

In 2018 the Ministry of Communication and Information Technology ( Kominfo ) removed 1,285 content related to radicalism and terrorism on social media . Thousands of these contents were spread on various platforms. The Ministry of Communication and Informatics even intensified the patrol of content on social media since terrorist acts involving underage children in Surabaya.

On different occasions, the head of the National Counterterrorism Agency (BNPT) Boy Rafli Amar said, so that company employees are equipped with knowledge about the symptoms and indications of radicalism to prevent and break the chain of understanding.

This is because the understanding of radicalism and terrorism can target anyone, including corporate employee groups.

However, Boy also stressed that there is no tendency to be suspicious let alone accuse radicalism in the environment of private companies. However, this prevention must depart from the realization that no single community is immune from the influence of radicalism.

Boy Rafli Amar also said that the radicalists still spread their ideology by using the covid-19 issue as evidence of the close of doomsday so that people join them. In addition they are also increasingly active in the world of social media because many people are online at home as a result of the PSBB that has been implemented by the government.

On another occasion, Deputy Chairman of the Pancasila Youth Bambang Bambang Soesatyo saw a special approach needed to prevent young people from being exposed to radical ideals.

National education must also be promoted again, bearing in mind that the ideology of radicalism contradicts the values ​​of Pancasila and the 1945 Constitution. So that the oath of students who want to build a state of khilafah that excludes other religious communities, as such is contrary to the ideology of Pancasila which upholds diversity and diversity as the basis national and state life.

From the first precept of the Almighty God, the intention is clear, which is to provide a foundation for every Indonesian human to interpret the belief in the existence of a creator in their own way.

We must be grateful to live in Indonesia that upholds diversity. Do not let the spirit of tolerance towards differences be damaged by radical ideology that upholds intolerant attitudes but tolerates violence.

) * Writer is citizens who live in Bogor

Beware of Radicalism among Civil Servants