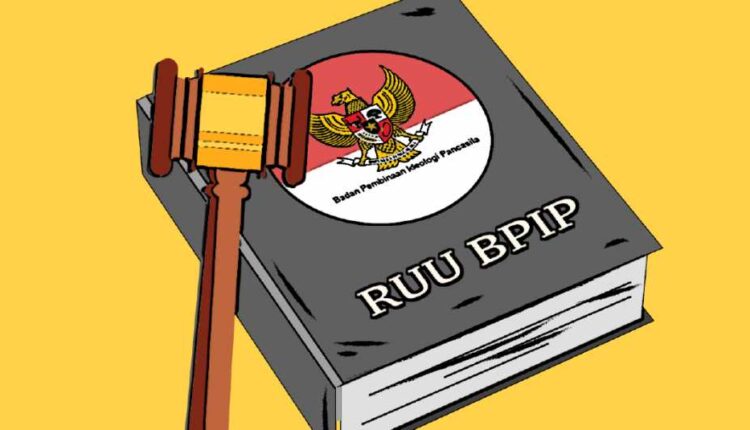 By: Muhammad Zaki) *
The government will formalize the BPIP Bill into law. This bill is very important because it can strengthen the state ideology and instill Pancasila values ​​in Indonesia. Moreover, the BPIP Bill includes the MPRS TAP which regulates the prohibition of communism in Indonesia, so it must be formalized immediately.
The DPR RI submitted a draft of the BPIP Bill and the president has read and approved it. Just waiting for the time it will be inaugurated. The BPIP Bill contains the duties, functions, structure and authorities of BPIP. So this institution will be strengthened and its duties clarified. The goal is for Indonesian citizens to apply Pancasila in their daily lives.
Many people are curious, does the BPIP Bill have a positive effect on Indonesian society? The answer is of course yes. The BPIP Bill is the legal umbrella for BPIP as an institution that maintains the integrity of Pancasila. Because Pancasila is the principle of the state and the source of all sources of law, it must be protected. Don’t let anyone insult him.
Pancasila is not only a word that must be memorized when we are still in school, but it is one that can unite many races, ethnicities, religions, economic classes, etc. So with Pancasila we can unite all Indonesian people and still respect their diversity of backgrounds. No wonder we still need BPIP to protect Pancasila.
BPIP is in charge of socializing Pancasila. The goal is that Pancasila must be applied in everyday life. By practicing Pancasila, we remain religious, are fair to others, maintain unity, and have deliberation to make decisions. Pancasila also makes us tolerant, mutual respect, mutual cooperation, etc.
Minister Mahfud MD stated that the BPIP Bill would be discussed openly and he was ready to accept public criticism. So we don’t have to worry if there are deviations in the articles of the bill. Because it is certain that its content is to support the existence of Pancasila and strengthen it. Pancasila is the road map of Indonesia and is used as a guide for the lives of its people.
The promulgation of the BPIP Bill as a Law is an effort to preserve Pancasila. Also protect Pancasila from radicalism and communism. This is an important point of the BPIP Bill, because it is not the HIP Bill that changes name. According to the Chairman of the DPR, Puan Maharani, the BPIP Bill was different from the HIP Bill. Because the BPIP Bill contains a prohibition on communist ideology in Indonesia.
The public does not need to reject the existence of the BPIP Bill because in addition to banning communists in Indonesia, it also invites everyone to love Pancasila. Pancasila is not only a slogan that is emblazoned on posters or city monuments, but is a principle of the state that penetrates deep into the chest. By practicing Pancasila, we increase the sense of nationalism and patriotism.
BPIP is a Pancasila development agency and we don’t need to be afraid when reading its assignments. Because Pancasila socialization will certainly not be boring like it used to be. If in the 1980s until the 1990s all workers and students were required to pass the P4 upgrading, it is not like that now. Pancasila socialization is carried out in a contemporary, fun way.
Pancasila socialization is carried out through social media because many Indonesian citizens access it, especially young people. They were invited to love Pancasila even more by participating in a short story competition and given big prizes. In addition, lots of interesting content and graphics tell about the importance of practicing Pancasila in life.
BPIP also uses the Youtube platform and the Tiktok application to promote the value of Pancasila, especially for millennials. The goal is that they have a high sense of nationalism and deepen Pancasila. This socialization through Yotube is in accordance with President Joko Widodo’s recommendation.
The BPIP Bill has strengthened BPIP’s position as a competent institution. BPIP aims to socialize Pancasila to all Indonesian citizens, especially young people. With the BPIP Bill, no one can dissolve the institution.
) * The author is active in the Cikini Press and Student Circle