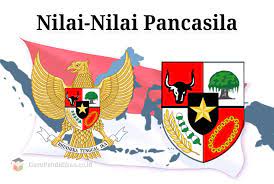 The community supports strengthening the values ​​of Pancasila and Tolerance in the Community. Strengthening these values ​​is one effective way to stem the influence of foreign beliefs that can bring Indonesia into disunity.

If you look at history, Pancasila as the basis of the state has very strong roots for the Unitary State of the Republic of Indonesia (NKRI). Pancasila has not been widely implemented at the operational level of policies and actions.

One of the basic characteristics of Pancasila is unity. These properties are listed in the third precept. This precept shows that the Indonesian nation, which has various cultures and ethnicities, must maintain a sense of unity for the realization of harmony among the Indonesian people.

Pancasila itself was ratified on August 18, 1945, exactly 1 day after Bung Karno proclaimed independence. The ratification of Pancasila coincided with the 1945 Constitution as the first constitution of the Republic of Indonesia. As the name implies, Pancasila has five precepts, each of which has a deep meaning. The Pancasila Ideology Agency or BPIP summarizes the values ​​of Pancasila as a way of life.

In the first precept of God Almighty, this precept means that Indonesian citizens trust and fear God in a way that is in accordance with their respective religions and beliefs. The second precept of just and civilized humanity implies that every human being has the same degree, taking care of each other and working together for the peace of the Republic of Indonesia.

The third principle, the Unity of Indonesia, sends a message to all Indonesian people. in order to place the unity of the unity and interests of the state above the interests of each. The fourth precept, democracy led by wisdom in representative deliberation. The precept with the longest sentence implies that every citizen cannot impose his will on others and must prioritize the interests of others. In addition, differences in viewpoints must be resolved through deliberation.

These Pancasila values ​​can of course be realized through a positive attitude. As well as various ways to strengthen the values ​​of Pancasila. One of the concrete steps in an effort to strengthen the values ​​of Pancasila is to work together when facing a difficult job so that it can be completed immediately. In addition, it is equally important to prioritize deliberation in dealing with differences of opinion.

Apart from Pancasila, tolerance must also be maintained. Tolerance is an attitude of mutual respect and appreciation between groups or between individuals in society or in other spheres. Tolerance can avoid discrimination, even though there are many different groups or groups in a society.

Presidential Chief of Staff General TNI (Ret.) Moeldoko appealed, So that Indonesia can be more advanced, then there should be no more thinking that distinguishes between the majority and the minority. Moeldoko said, Tolerance is no longer a minority and a majority. If this nation still has feelings of majority and minority then it will not progress.

Moeldoko also said that the history of the nation’s struggle was built by various religions and ethnic groups. Therefore, from now on, remove the dichotomy between the majority and the minority. “Everyone acts as an agent of change to correct damaged, distorted and distorted thought patterns so that thoughts that were originally incorrect then change,” he explained.

He gave an example in Javanese gamelan, all traditional musical instruments are played together in harmony. Then it can be a beautiful force, so what must be harmonized is everyone.

If we look at a football team in Indonesia, we will be able to see how passionately they are wearing a jersey with the Garuda logo on their chest, they are all not only from one ethnicity, but they all come from all directions regardless of ethnicity, race and religion. The players are united by a spirit that is to increase the nation’s self-esteem in the sports arena.