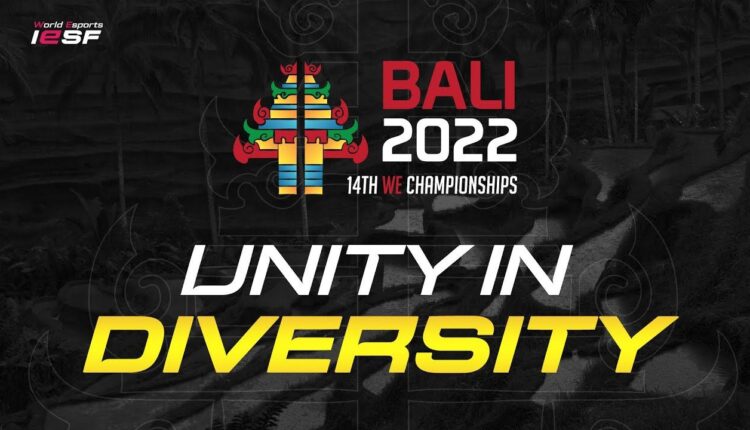 Indonesia is again hosting an international event, namely the International Esports Federation or IESF World Esports Championship 2022, which will be held in Bali today December 2-11 2022. The 14th IESF Bali presents six game numbers that will be contested, namely Counter-Strike, PUBG Mobile, Mobile Legends, eFootball 2023, DOTA 2, and Tekken 7. Interestingly, this event will be recorded in the Guinness World Records as an offline event with the largest number of participants.

Appreciation is appropriate given to the Indonesian Esport Executive Board (PBESI) under the leadership of the Chief General of Police (P.), Budi Gunawan, who has succeeded in making new history. This is because the IESF Bali 14th WEC 2022 event is the largest outdoor esports event with the most participants in the world and is recorded in the Guiness Book of World Records.

The commitment of the Indonesian Esports Council (PBESI) to emphasize its readiness to provide real results for the huge potential of esports, in supporting the development and empowerment of a broad ecosystem, is exemplary for other sports development principals in Indonesia.

Another benefit is that the largest outdoor esports event in the world also offers a variety of other supporting activities, such as workshops featuring esport experts and players, exhibitions involving creative economy players, and creative stages. The participants will take part in esport activities while enjoying the beauty of the beaches and the natural charm of Bali, this is in line with the concept being promoted, namely sport tourism.

Specifically for the world esports championship, the series of matches in Bali is the culmination of a series of qualifications that took place around the world from February to October 2022. The series of activities as a whole involved 1 million esports athletes from 120 countries and 5 regions (Oceania, Europe, Asia, Pan America, Africa) which of course was also involved as a participant in the Bali 14th World Esports Championships.

Indonesia itself has fielded teams in all types of games being contested. The qualification round to determine the athletes selected for the national team representing Indonesia in the 14th World Esports Championship 2022 was held from 12 to 26 October 2022 in Bali.

As stated by the PBESI Daily Chairperson, Bambang Sunarwibowo, he expressed optimism that the Indonesia Esports Summit: Bali 14th World Esports Championships will become a strong foundation for Indonesia in the future as one of the world’s esports centers and barometers. This event is also expected to be able to participate in achieving the target of 1.1 million jobs in 2022 and 4.4 million new jobs in 2024.

Overall, according to data owned by ESI Bali, as many as 105 countries out of the 120 targeted will have registered and participated in the tournament in Bali. The choice of the Island of the Gods itself is said to be due to the fame of Bali and the unquestionable availability of accommodation.

Appreciation was also given by IESF President Vlad Marinescu who explained that holding the 14th World Esports Championships would be a milestone for PB ESI, as a member of IESF. He admitted that he was very enthusiastic about welcoming the event which was held in the most beautiful country, namely Indonesia, and especially Bali. He also thanked Mr. Budi Gunawan as General Chairperson of PB ESI and welcomed PB ESI as the IESF family, and is ready to collaborate with PB ESI to support the growth of the esports community in Indonesia which is growing and developing very fast.

Priorbya, the General Chair of PBESI, Budi Gunawan, revealed that the formation of the PBESI board was the first step to building esports in a more positive direction. PB ESI must be able to face challenges and obstacles. The presence of PB ESI is expected to increase the achievements of electronic sports on the international stage.

The General Chairperson of PB ESI who is also the Head of the State Intelligence Agency (BIN) said that his party had made regulations governing esports to be clearer and more focused, so that they could make more achievements at the international level.

PB ESI under the leadership of Budi Gunawan is committed to making online sports or esports one of the supporters of realizing national economic recovery. To achieve this commitment, it must begin with the development of PB ESI as one of the organizations that produces outstanding talents.

Seeing the various backgrounds and achievements, it is appropriate for various parties to give appreciation and support the progress of national sports, especially esport, so that they become superior sports that can always make the nation proud.

*The author is a university student in Bali.