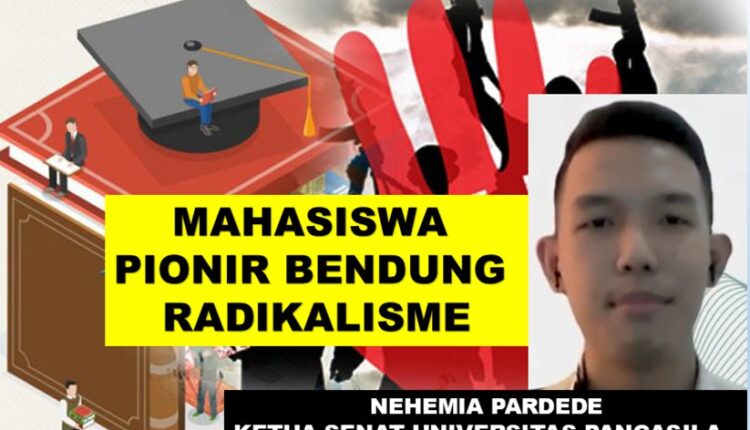 Chair of the Pancasila University Senate: Students Must Be Pioneers in Damaging Radicalism

Jakarta, CIDISS.CO – The Chair of the Senate of the Pancasila University, Nehemia Pardede, said that students must be able to become pioneers in stemming the notion of radicalism that is not in accordance with the state’s foundation, namely Pancasila. Students as the younger generation must be able to fortify this nation so as not to be influenced by radical ideas that come from outside.

This was revealed when Nehemia Pardede conducted an online dialogue in the Pancasila TV National Dialogue program (16/6/2022).

Nehemia admits that as a student we have to learn and when in this learning process, we find out a lot, so that as a young person we are likened to a student like a glass that is only half filled and there is still half that needs to be filled. That’s where students look for their identity, so by looking for their own identity, students are in the wrong direction. Therefore, students can be infiltrated by ideas that cannot be controlled, including the notion of radicalism.

Agree, that students are pioneers in stemming radicalism. So to stem the notions of radicalism, it is the duty of students as written in the third Tri Dharma of Higher Education regarding community service, said Nehemia.

The role of students as agents of change, pioneers and social control is very important in creating good things for the community, including stemming radical things, explained the Chair of the Senate of the Pancasila University.

Students must be able to filter themselves and find the basis of what they read and see. These two things are very important so that students are not influenced or infiltrated by radical ideas that are deliberately spread. Indonesian students must be tolerant of others considering that Indonesia is a diverse country consisting of various ethnicities, religions, and races, concluded Nehemia.

Indonesia is a Destination Country for Foreign Investment