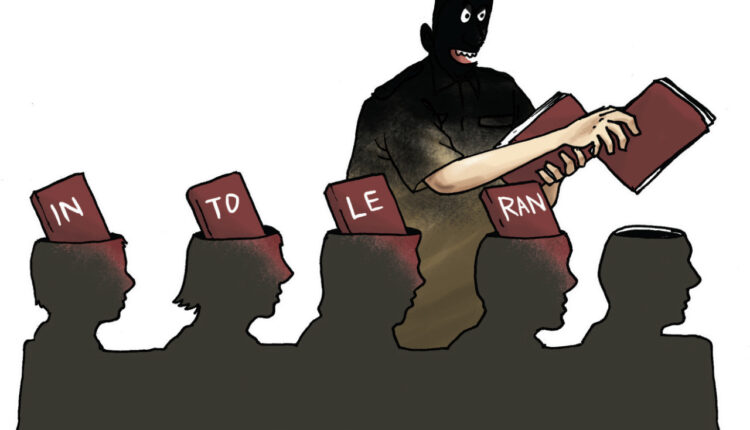 Intolerance has no place in Indonesia

Intolerance has no place in Indonesia. Intolerance must be contained because it only causes conflict and destroys the spirit of Indonesian unity which consists of many tribes and religions.

Intolerance in Indonesia cannot be compromised. Indonesian President Joko Widodo firmly said that the government would not compromise on acts of intolerance. According to Jokowi, intolerance is a seed that can damage the life of the nation and state.

Previously, Indonesian Vice President Ma’ruf Amin said that intolerance towards other beliefs was a violation of the constitution. This is because the constitution guarantees freedom of religion.

Ma’ruf said Article 28E paragraph 1 of the 1945 Constitution explains that everyone is free to embrace religion and worship according to his religion. Not only that, he also mentions Article 29 paragraph 2 states that the state guarantees the independence of every resident to embrace their respective religions. Ma’ruf said tolerance needs to be part of an attitude of life, that is, everyone can accept other people’s differences, both knowing opinions and beliefs.

According to Ma’ruf, tolerance is needed to maintain integrity and unity and unity. As the majority religion, Ma’ruf said Muslims need to adhere to the principle of brotherhood. He reminded that the main task of every Indonesian citizen at this time is to continue to maintain national stability and the integrity of the nation with harmony and tolerance. Therefore, the vice president emphasized that various polemic issues related to racism, intolerance and hate speech become topics that appear on social media and must be controlled.

According to Ma’ruf, one of the efforts that can be done is to continue to maintain and oversee the diversity that has been agreed upon by the founding fathers of the nation. Because, from the beginning the nation’s founders had anticipated the challenges of harmony that would be faced by the Indonesian nation.

The vice president has also responded to accusations that the government has often cornered Islamic groups. Ma’ruf claimed that the government had provided an opportunity for all parties to carry out their activities and movements to establish an organization that was in accordance with their aspirations.

However, he also reminded that existing rules must be obeyed. This is because the government will take action if there is a movement that can endanger the integrity of the nation, damage diversity or also violate agreements in the nation and state.

Vice President Ma’ruf Amin once regretted the practice of intolerance that had reached an attitude of not wanting to be friendly, sitting next to each other or conducting business activities with groups or individuals of different religions or beliefs. He is also worried that if this intolerance is allowed it will be dangerous and damage the integrity of the Indonesian nation.

Until now, intolerance still occurs in Indonesia, even cases of intolerance are carried out by unscrupulous teachers, one of which occurred in a public school in East Jakarta some time ago. Ima Mahdiah as a member of the DPR from the PDI-P faction said the intolerance case occurred when the school was holding the election for the OSIS Chair.

At that time, one of the teachers told his students who are members of the Islamic Spiritual Organization (Rohis) afar to choose a candidate for chairman who is of the same religion through WhatsApp Group. In the message was written an order from the Unscrupulous Teacher to choose a candidate for the OSIS chairman who was of the same faith. Ima herself said that there is no place for intolerance in Indonesia, especially in DKI Jakarta.

He said that the state school is paid for by the APBD, the people’s tax money, not only Muslims who pay taxes, so this is an attempt to divide. Moreover, the teacher has become a civil servant whose monthly salary is also from taxes. Of course he should be able to accommodate everything. The former staff member of Basuki Tjahaja Purnama alias Ahok emphasized that his attitude would not change if similar cases occurred in other religions.

Students themselves are agents of the nation’s successor, so it is important to instill the values ​​of democracy and tolerance. It doesn’t hurt just because they have different beliefs, because those who are different have been united with the spirit of diversity.

Maintaining tolerance means maintaining the strength of the Unitary State of the Republic of Indonesia, the spirit of unity must be maintained and maintaining that spirit is the role of all Indonesian citizens. Do not let differences of belief actually damage the democratic order that has been agreed upon by the founding fathers of the nation.