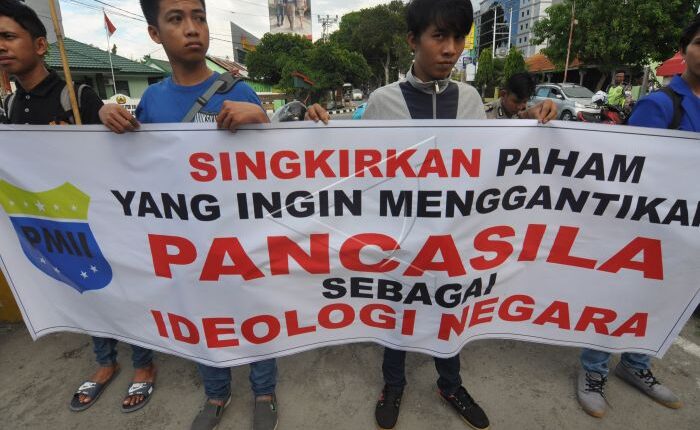 The generation of the caliphate issue apparently did not stop even after organizations such as HTI had their licenses revoked. The establishment of a caliphate, especially in terms of political institutions or power, is certainly not valid in the modern era. So the term Khilafah in the modern era is irrelevant to be applied.

The Founding Fathers of Indonesia have also agreed that Pancasila is the ideology / foundation of the state, so that all components of the nation without exception have the obligation to uphold Pancasila if there are deviations or violations of Pancasila.

If the caliphate continues to be enforced, then who will be made the caliphate? The number of Muslims in the world alone is estimated at 1.8 billion and spread all over the world. The matter of who has the right to become caliph will certainly be a complicated issue, considering that Muslims consist of many different tribes and nations.

Authoritarianism is clearly incompatible with Pancasila, so the concept of caliphate can never be applied to political movements. The caliphate itself has stopped in the era of Khulafaur Rashidun, after the emergence of various dynasties until the Ottoman era (Turkey) which was completed in 1923. The use of the term caliphate has also been completed.

The Ottomans themselves actually used the Ottoman State government system instead of the Ottoman Caliphate, this is where the literacy weak point of groups or sympathizers who carry the caliphate ideology is.

Islam itself has taught various things that regulate the judiciary, ministries, wilayatul qadha and finance, all of which also exist in Islamic history and are products of ijtihad. Therefore, it is necessary to have real efforts from various stakeholders to be aware of the caliphate ideology which is increasingly massive in the lines of people’s lives.

The former leader of Hizb ut-Tahrir Indonesia (HTI), Ayik Heriansyah emphasized that the teachings and narratives of the caliphate as a system that must be implemented in Indonesia are wrong and unlawful teachings, so they must be resisted because they include rebellion. Indeed, the current form or system of Indonesian government includes a caliphate, because it has appointed and elected its leader, namely the president as head of state.

Khilafah was then defined as an activity or charity to choose a leader, but the caliphate itself has been echoed so that people reject the government that has been legally elected, and then fight for their group leaders to become rulers.

Indonesia is a nation consisting of many tribes and religions. This difference should not be a reason to discriminate against each other. Diversity in Indonesia is a sunatullah that cannot be denied, so maintaining the life of the nation with all the differences is a mandate from God that must be nurtured and guarded.

The notion of the caliphate itself becomes very problematic in Indonesia because it seeks to impose the will on everyone to establish a state on the basis of a certain religion, namely Islam. If propaganda about the caliphate is forced, it will have the potential to cause a clash that could lead to civil war.

The National Counterterrorism Agency (BNPT) said that in order to reduce and fight the propaganda of the caliphate group, religious people in Indonesia are required to obey the agreement that has become the agreement of the nation’s founders, national leaders, religious scholars and religious leaders. During the old caliphate, there were a number of civil wars among Muslims. The list can be very long.

They are the victims too