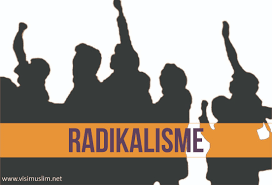 People are asked to be aware of the movement of CSOs radika l forbidden. In addition to potentially threatening the ideology of Pancasila, the existence of banned radical mass organizations can cause horizontal conflicts.

Previously, the success of the Taliban in controlling the capital of Afghanistan, Kabul and almost the entire territory of Afghanistan, apparently sparked a reaction from former terrorism convicts and sympathizers of radical ideologies in Indonesia .

Terrorism observers say that euphoria or excessive excitement over the Taliban’s victory still needs to be watched out for. Intelligence and Terrorism Observer from UI (University of Indonesia), Ridlwan Habib, said that what needs to be observed more about the Taliban victory is that this event will be an inspiration and new motivation to form an Islamic state, not only in Indonesia but also in other countries.

Ridlwan said that the euphoria of the Taliban’s victory was still limited to ideas and ideas, so that the authorities could not act or arrest the people who were infected with the euphoria. Meanwhile, in So lo Central Java, former member of Jemaah Islamiyah (JI) Sofyan Tsauri see that the possibility of pen guasaan back A fganistan

Muslim scholar Alwi Shihab said that domestic radical groups prefer scholars from the Middle East or the Arabian peninsula to serve as role models. They underestimate the original Indonesian ulema.

Alwi’s assumption is because he considers that lectures or lectures from Indonesian clerics are less attractive to radical groups. He said that radical Islamic figures in Indonesia often provoke the public. For example, by mentioning that Pancasila is an ideology that is contrary to Islamic teachings.

Reflecting on this phenomenon, Alwi assessed that scholars from the Middle East were involved in preventing the dangers of radicalism in the country. According to him, this can be an efficacious step to anticipate the growth of radical Islam in Indonesia. Moreover, previously we often heard that the targets of terrorists were not only places of worship, but also police officers who were on duty.

Terrorism expert Sidney Jones said that the police are still considered the main enemy of terrorist groups in Indonesia. The motive for revenge is a very strong motive behind a number of attacks against the police.

Sidney also said that by killing the police, then they could seize the gun. It can be added value and capital for terrorist groups to be used in attacks in the future.

Former National Police Chief General Tito Karnavian once said that police were targeted by terror because they were considered to support a system outside of Islamic law. Therefore, radicals and perpetrators of terrorism often regard the police as infidels who must be exterminated.

As if attacks on police officers are not new news, in 2016, there was an attack on 3 police officers on Jalan Perintis Kemerdekaan, Cikokol, South Tangerang. The perpetrator with the initials SA is suspected of belonging to the Daulah Islamiah group in Ciamis, West Java.

Then how can someone have the courage to attack the police? Let’s flashback to last August 2019 when members of the Wonokromo Surabaya Police were attacked. Densus 88 at that time provided information to the National Police Chief that the perpetrators were exposed to radicalism from the internet media, this was classified as self-radicalism or self-radicalization .

Tito Karnavian said that the perpetrator had his own version of jihad and then went to the Wonokromo Police and attacked the picket officer who was on duty at the time.

Previously, the General Chair of the Islamic Ormas Friendship Institute (LPOI) KH Said Aqil Siroj asked the government to be more assertive in cracking down on radical groups . Radicalism dressed in religion has the potential to lead to fights which can then damage the sense of unity and integrity among Indonesian citizens.

Radical organizations are getting more adept at spreading their radical ideas, they recruit their members in a very subtle way, including through the educational environment. So we should be wary of the movements of mass organizations or community groups that do not heed the symbols of the state and do not uphold the state’s foundation, namely Pancasila.