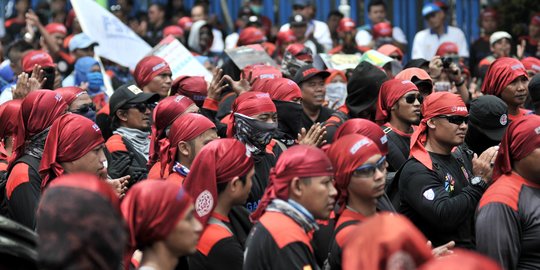 In a demonstration against the ratification of the omnibus law organized by the workers, it seems that not a few workers experienced emotional instability when the action took to the streets. As a result, many parties ignore health protocols, making it easier for someone to contract Covid-19.
In a large population crowd, of course we cannot guarantee that none of the participants carry the virus. This is exacerbated by inevitable direct physical contact with contaminated surfaces, whether touching the mouth, nose or eyes as an entry point for corona virus infection.
It seems that in addition to the absence of distance during the action, emotional instability has also contributed to increasing the potential for Covid-19 transmission. This was confirmed by the University of Indonesia (UI) Nursing Expert, DR. Agus Setiawan, himself said that the emotional instability of the demonstrators can actually affect their mental status which leads to decreased immunity.
Agus said he did not question the substance of the action, because expressing his opinion was also important because it was everyone’s right. But stopping the spread of covid-19 and preventing the formation of new clusters are also our obligations and must be of concern to all of us. Pity the health workers who are tired and many have become victims.
Meanwhile, as many as 12 workers who worked at a sports clothing factory in Tangerang Regency were confirmed to be Covid-19 reactive after undergoing a rapid test.
The rapid test was carried out on workers while they were carrying out a demonstration in front of the factory in the context of the agenda of rejecting the ratification of the Job Creation Law.
Spokesperson for the Covid-19 Task Force Hendra Tarmidzi confirmed this. He said that the rapid test was carried out impromptu.
On a different occasion, the Spokesperson for the Covid-19 Handling Task Force said, currently there are groups of people who express their aspirations openly, in large numbers, this is certainly a potential covid-19 cluster. This will certainly be counterproductive in Indonesia’s struggle against the spread of the corona virus.
He emphasized that in the war against Covid-19, the government and health workers could not do it. However, community participation in implementing health protocols is also important. In the current state, keep an absolute distance.
There are many concerns that this massive demonstration will become a space for the transmission of the corona virus. The emergence of demonstration clusters can certainly be a big risk in expressing opinions without complying with health protocols.
Instead of demanding rights, demonstration clusters have the potential to contract workers with Covid-19 which can have fatal consequences.
We need to know that by keeping a minimum distance of 1 meter, this will reduce the risk of covid-19 transmission by up to 85%. Meanwhile, wearing a surgical mask will reduce the risk of transmission by as much as 70%.
In Jakarta, 14 demonstrators were found in a demonstration against the work copyright law. The 14 people came from 1,192 demonstrators who were arrested by the Polda Metro Jaya.
Deputy Governor of Jakarta Ahmad Riza Patria said that the 14 people consisted of students and university students. Furthermore, the DKI Provincial Government will carry out tracing to follow up on the results of the tests conducted by Polda Metro Jaya.
Regarding the handling of the 14 people, Riza said that his party left it to the DKI Health Office whether they would be placed in athletes’ houses or to other locations to carry out isolation.
The police previously carried out a rapid test of 1,192 people who were arrested during a demonstration to reject the omnibus law in Jakarta. As a result, 34 of the action participants showed reactive results.
Especially with the increase in the number of Covid-19 patients, which has occurred mainly because people without symptoms (OTG) ignore the behavior of health protocols in various regions.
If a demonstration participant is found who is positive for Covid-19, of course tracing will be difficult. This is because most of the demonstration participants do not know each other with the people around them.
This shows that demonstrations that ignore health protocols have the potential to increase the number of positive covid-19 incidents. It has been 7 months since the government and medical personnel have been fighting against this deadly virus, of course it will be a waste of time if people continue not to comply with health protocols while outside the home.