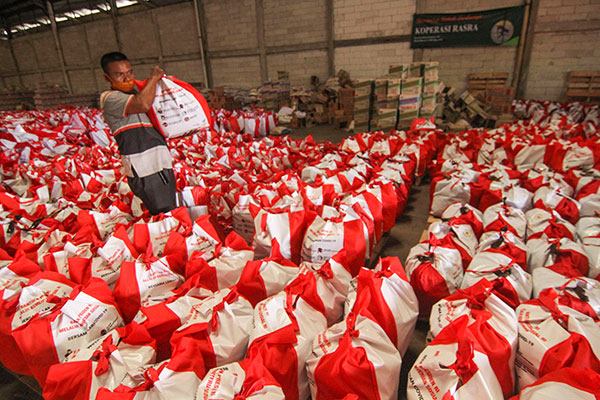 On the occasion of the press conference, Airlangga said that the 10 kg rice aid program had been fully distributed in accordance with the target of 28.8 million families. He explained that the distribution of the social assistance rice was distributed to the beneficiary families (KPM) of the Cash Social Assistance (BST) and the Family Hope Program (PKH) as many as 20 million families for the first phase.

The next stage is the provision of rice assistance to KPM Non-Cash Food Assistance (BPNT) / Basic Food Cards with a figure of 8.8 million families. In addition, for social assistance, 5 kilograms of rice was distributed to 5.9 million informal workers in Java-Bali affected by PPKM with data proposed by local governments. It is known that for this assistance, distribution is under the authority of the local government through the social service.

The social service also has the authority to ensure the quality of medium-type rice is in good condition when it is received by the community. Previously, the Secretary General of the Ministry of Social Affairs, Hartono Laras, said that after monitoring the distribution of PPKM rice aid in a number of regions, his party still entrusts Perum Bulog as a national food SOE to continue distributing rice aid during PPKM.

Meanwhile, Minister of Social Affairs Tri Rismaharini revealed that after the improvement of the new integrated social welfare data (DTKS), the realization of the distribution of social assistance for recipients of families of hope (PKH), Non-Cash Food Assistance (BNPT), amounted to 32,953,559 families/person.

Minister Tri Rismaharini will also distribute BST to underprivileged communities worth IDR 300 thousand per month per recipient during Emergency PPKM. The plan is that BST will be extended by two months from July-August. So that the funds received by the community reached Rp 600 thousand per recipient. The target is that BST can be distributed starting last week or at the latest until this weekend. The disbursement will be given for two months at a time, so it is expected to be a cushion for people affected by the emergency PPKM.

Previously, Finance Minister Sri Mulyani said the distribution of PKH funds would be given for three months at a time in July. The acceleration of PKH for the third quarter is carried out to provide a cushion for vulnerable communities during the implementation of Emergency PPKM. The government will provide PKH assistance for vulnerable communities according to the aid or need index. For families with young children and pregnant women, the amount given is Rp. 3 million.

Previously, the police had succeeded in uncovering the action of cutting cash social assistance funds (BST) carried out by a person with the initials MI (41) who was a timer for the M15 microbus public transport route Tanjung Priok City.

Budhi explained that the central government had allocated BST to people affected by the corona virus pandemic, some of which were in the form of cash amounting to IDR 600,000 per month. The MI mode of cutting action is that they are asked to disburse to an ATM and there is a certain amount of money that must be given to MI to be given back to the relevant parties to facilitate it. In this mode he managed to pocket Rp 2,000,000.

When PPKM was implemented, of course there was a stagnation in the mobility of residents, so an injection of funds or assistance was needed to survive during the pandemic. On the other hand, the optimization of social assistance should also not be misused, because the social assistance is the livelihood of the people whose economy has been hit by the Covid-19 pandemic.

By: Savira Ayu)* The author is a contributor to the Press Circle and a Cikini Student