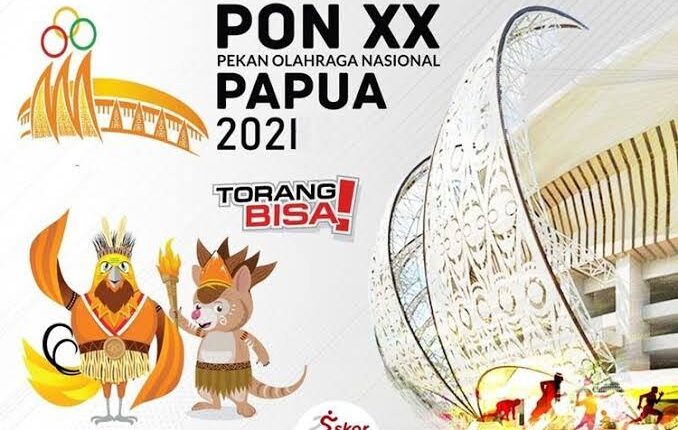 By: Rebecca Marian) *
20 October 2021, the 20th national sports week will be held in Papua. The event, which was postponed for a year due to the pandemic, is still well prepared, as the Papuan regional government tries to be a friendly and professional host. A number of sports arenas have been perfected, so that the event will run smoothly.
The Indonesian people are waiting for the XX PON to start, in a few months. After 2018 they enjoyed various sports competitions at the Asian Games, in 2021 they can be satisfied watching Indonesian athletes compete. The Papuan regional government is proud to have been appointed to host the PON, because it has the trust of the central government.
Preparation for PON XX is 100%. The venues that are ready include the Lukas Enembe Stadium in Jayapura, the futsal sports hall in Mimika, and the Dominggus Mandacan Circuit in Manokwari. There is also a volleyball gym, a GIDI gym, Trikora sports center, Cendrawasih sports center, and softball and baseball fields. For swimming competitions an aquatic arena is prepared.
The Lukas Enembe Stadium was originally called the Papua Bangkit Stadium. The name was changed in honor of the Governor of Papua Lukas Enembe. This football stadium is very proud because it is the largest sports venue in eastern Indonesia. It has a capacity of up to 40,000 spectators and is of international standard, meeting FIFA regulations. While the area is 71,697 square meters.
Apart from stadiums and sports arenas, the Papuan regional government already has an Athlete Village located in the Mandala field, Jayapura City. The athletes ‘guesthouse and the KONI Papua office were inaugurated by Lukas Enembe, the Governor of Papua, on August 24, 2020. The athletes’ guesthouse can accommodate up to 524 athletes.
Wisma Athlete is claimed to be equivalent to a five-star hotel, and the building has 7 floors. In addition to lodging, there is also an athlete’s training area and equipment. Papua Governor Lukas Enembe stated that the construction of the athletes’ guesthouse as well as the KONI office was carried out for 9 years. From now on, Papuan athletes can live in 4-star buildings and not be half dead anymore.
The facilities at the athletes’ homestead are very important. Because in XX PON, there are many athletes who come from other provinces. The total quota for athletes is 6,442 people, who come from 37 sports. Not to mention the coach and official team. So that the existence of the athletes’ guesthouse is really needed for their lodging.
The sports that will be contested include aquatic, fencing, weightlifting, athletics, baseball, motorbike and billiards. There are also basketball, handball, vol, badminton, chess, cricket, rowing, wrestling, hockey, judo, karate, kempo, sailing and shooting games. In addition, there are competitions for muaythai, archery, rock climbing, pencak silat, rugby, and others.
The success of holding the XX PON is highly prioritized, because the Papuan regional government wants to give the best. Not only for the athletes who compete, but also for the audience. Both those who will see it live at the stadium, or those who see it on television / via streaming.
The local government of Papua tries to be a good host, because hosting PON is an honor. When the sports week is held at Cendrawasih Earth, there will be a lot of eyes on Papua. Not only from Indonesian citizens, but also from audiences abroad.
They will see how advanced Papua is with various sports facilities and infrastructure of international standard. The Earth of Paradise is modern, and is no longer attached to the stereotype of backwardness. Eastern Indonesia is very beautiful and very worthy to be visited by tourists.
The XX PON in Papua is a major event that is not only important for athletes and coaches, but also for local governments. PON success is mandatory. Because it shows that the Papua regional government is ready to be a good host and work professionally.

Beware of the Spike Case of Covid-19