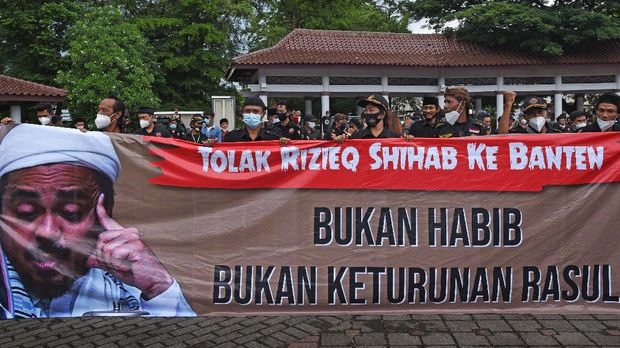 Society Refuses to Safari Habib Rizieq in the Region

There were many rejections to the lecture safari that Habib Rizieq would attend . People openly do so because they feel that it does not provide coolness, but instead divides the nation. Also always use harsh diction, which is very inappropriate as a preacher.

Habib Rizeq’s return to Indonesia was welcomed by his followers. But unfortunately he was stubborn and did not want to quarantine for 14 days, even immediately stepping on the gas for a lecture safari. Starting from Bogor, Petamburan , to other areas. Even though we know that the event invited a lot of people and clearly violated health protocols.

However, Habib Rizieq insisted that he did not violate it because he argued that he had conducted a swab test in Aran . Even though he is not a medical worker, who knows he is a person without symptoms. When he arrived in Indonesia, he was even happy because the lecture he attended was able to attract thousands of people. However, there are groups who are antipathy because he violates health protocols.

No wonder Habib Rizieq’s lecture has been rejected everywhere. He was planning to hold a safari from city to city, but before that, there were already groups of people who protested. In Semarang, the Semarang City Peace Community Alliance (AMDKS) organized an action to reject Habib Rizieq’s lecture because it had both provocative and political content .

The action coordinator, Rico Septian, stated that the people of Semarang wanted peace without commotion. They promote tolerance, harmony and harmony. Do not let Central Java, especially Semarang, become noisy because of Habib Rzieq ‘s provocative actions . So that it spoils the already conducive atmosphere of harmony.

Rejection of Habib Rizieq’s lecture safari also occurred in Surabaya. A number of youths who are members of the NKRI Love Alliance refuse Rizieq’s arrival to East Java. Some people unfurled banners stating the reason for the rejection, namely that he was a divider of the people. He also frequently destroys unity and incites hatred.

The number of rejections in the regions shows that the people have been very angry with Habib Rizieq’s presence, always causing a stir. After returning from the Holy Land, his speech style was not polite, but still fiery and insulting to the other party. In fact, he did not hesitate to use harsh words that were very inappropriate for a religious leader.

What if there were small children who listened to the lecture? They will get dirty diction and then can imitate it at home, even though they don’t know what it means. Religious lectures should not be poisoned with negative words that can harm others. Because in essence, preachers should bring good, not bad.

Habib Rizieq’s lecture was also proven to have violated health protocols. However, he argued that he had worn a mask, and the lecture participants also wore it. There are also dozens of hand washing stations provided. However, he forgot that he had violated the physical distancing rules . We also don’t know whether they wear masks all the time or take them off occasionally.

The public was furious because of the events attended by Habib Rizieq , a new corona cluster was formed . Unmitigated, the number is 80 covid patients ! That’s from random test results, and there could be dozens of other OTGs. For this reason, when Habib Rizieq ‘s lecture is disbanded, he must not be angry. Because each event creates a surge in Covid-19 patients.

Never mind Habib Rizieq’s lecture safari because he has proven to divide the nation’s peace, as well as continue to provoke many people. His lectures were also politically charged and used harsh words. When there are many people who refuse Habib Rizieq to come to his area, it will be very natural. Because they don’t want their territory to be confiscated.

) * The author is a citizen living in Banten