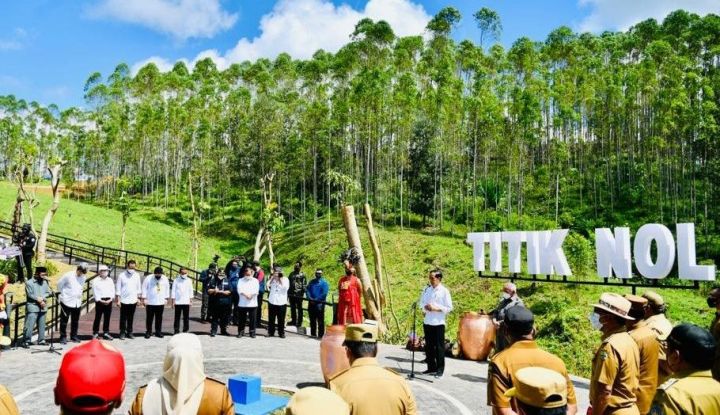 IKN Will Become a Symbol of Pluralism

The National Capital (IKN) of the Archipelago will become a symbol of pluralism. With this concept, IKN is not only a sophisticated capital city, but also friendly to all circles and all citizens .

The new capital city of Indonesia is under construction, in Penajam Paser Utara, East Kalimantan. Kalimantan was chosen as the newest location because it is located in the middle of Indonesia so that there will be equitable and just development. IKN will be a very special city because it will be built as a high-tech area as well as environmentally friendly.

Later in the IKN there will be various kinds of Indonesian citizens who become citizens. In addition to the native people of Kalimantan (from Dayak and Banjar) there are also migrants from Java, Sunda, and other areas. IKN became ‘mini Indonesia’ aka a gathering place for Indonesian citizens from various regions, and merged into one, but still in harmony and peace with a high spirit of pluralism.

Marthen Saini, Head of the Toraja Family Association of Kutai Kartanegara Regency, stated that IKN Nusantara will become a symbol of pluralism and ethnic diversity in Indonesia. The people of East Kalimantan are very open, plural, and tolerant of various cultures in this country. East Kalimantan is also a region that upholds tolerance, both religious and ethnic.

In a sense, IKN will become a symbol of pluralism because the people are not just Dayak or Banjar people. But there are also other tribes such as Javanese, Sundanese, Toraja, etc. They are immigrants who come to IKN because of official ties and are welcomed by the indigenous people of East Kalimantan as hosts.

Pluralism was built because previously in East Kalimantan there were already various tribes, for example the Kutai, Dayak Kenyah, Banjar,  and others. They respect each other even though they have different ethnicities and beliefs. Then, when there are immigrants from DKI Jakarta who are Betawi, Javanese, Sundanese, etc., they welcome them very well, because they realize that differences are beautiful.

In IKN Nusantara, pluralism will be formed because the people realize that Indonesia is a country consisting of many different tribes and beliefs, but still one. Bhinneka Tunggal Ika is not just a motto that is memorized, but also applied. With unity, pluralism and tolerance will be formed and society will live in peace.

People whose status is immigrants in IKN Nusantara need not be afraid if they move to Kalimantan. Friction between migrants and natives will not occur, because it has been regulated by the government / IKN authority. Nevertheless, each party needs to prioritize tolerance and the spirit of unity.

Meanwhile, the Governor of East Kalimantan, Isran Noor, stated that in East Kalimantan there was never any SARA (ethnic, religious, racial, and inter-group) conflict. The people of East Kalimantan have always been open to migrants since time immemorial and this province is the most peaceful region.

In a sense, IKN Nusantara in North Penajam Paser, East Kalimantan, will be a place that upholds pluralism. The reason is because the people are very friendly to immigrants. There will be no conflict between migrants and indigenous people, for example because of fighting over jobs. The indigenous people of IKN realize that sustenance has been arranged by God and there is no need to fight over it to cause conflict.

Pluralism must be upheld because later when IKN Nusantara has finished its construction and has begun to be inhabited, the people will be diverse. The population is not only from Dayak, Kutai, Banjar, or other tribes in Kalimantan. But also from Java, Sunda, and other areas throughout Indonesia.

The migrants are from DKI Jakarta who moved because they served in the Ministry/State Institution or from other areas who deliberately moved to look for work. They will mingle with the natives peacefully knowing that Indonesia is one. If there are differences in ethnicity and belief then it will not be a problem.

In addition to upholding pluralism, the people at IKN Nusantara are also full of tolerance. The residents have different beliefs but will not cause conflict. In fact, in the future there will be cooperation between them, and it will be purely business, regardless of what their beliefs are. They respect each other and don’t mock if someone is diligent in worshiping in their house of worship.

IKN Nusantara will become a symbol of pluralism because the community consists of various ethnic groups and different beliefs. This difference is not a problem because they are aware that upholding pluralism and tolerance is a must. Peace will occur because there is no sharp conflict between the migrants and the natives of Kalimantan.

. )* The author is a contributor to the Nusantara Reading Room