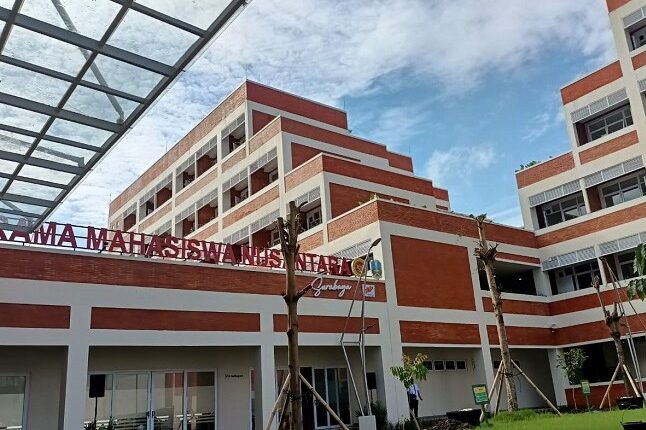 The Surabaya Archipelago Student Dormitory (AMN), which was started in September 2021, will be completed in May 2022. AMN Surabaya, which will be inaugurated directly by Indonesian President Joko Widodo (Jokowi) on November 29 2022, AMN is projected to accommodate outstanding students from all over the country.

Head of the East Java Settlement Infrastructure Center for the PUPR Ministry, Muhammad Reva, said the AMN development was to accommodate outstanding students from various regions of Indonesia studying in Surabaya and its surroundings.

“This dormitory was built to accommodate outstanding students from various regions throughout Indonesia who are currently studying in Surabaya or in regencies and cities in East Java,” said Reva.

Based on Presidential Decree No. 106 of 2021, AMN is inhabited by intercollegiate students from various regions who come from universities in one area with the condition that they are registered as recipients of an AMN scholarship.

Reva also explained that the AMN Surabaya building is a 5-floor vertical housing consisting of 2 5-floor towers equipped with connecting walkways between buildings. Block one is occupied by female students and block two is for male students.

“The facilities built at AMN Surabaya not only provide housing but are equipped with student competency development facilities such as libraries/reading rooms, study rooms, art rooms, language laboratories, sports fields, entrepreneurship coaching rooms, gardens, and other communal spaces,” he said.

Aside from being a residence, AMN is also used as a place for national development for AMN resident students who will be fostered by the State Intelligence Agency (BIN).

The State Intelligence Agency (BIN) and the Ministry of Education, Culture, Research and Technology (Kemendikbud Ristek) are working together in management and coaching at the Nusantara Student Dormitory (AMN).

The State Intelligence Agency (BIN), which is currently led by General Police (Purn) Prof. Dr. Budi Gunawan, S.H., M.Sc. is an Indonesian non-ministerial government institution tasked with maintaining national security and resilience. Therefore, it is BIN’s duty to foster students who live in the Nusantara Student Dormitory (AMN), especially so that students can have superior competitiveness and have national insight and a patriotic mentality to answer future challenges for the success of the nation’s progress.

For information, the construction of AMN is in accordance with Presidential Regulation (Perpres) Number 106 of 2021. In that regulation, the Ministry of Public Works and Public Housing (PUPR) built Nusantara Student Dormitories (AMN) and one of them is located in Surabaya, East Java.

Ahead of the Inauguration, BIN Prepares AMN Optimally