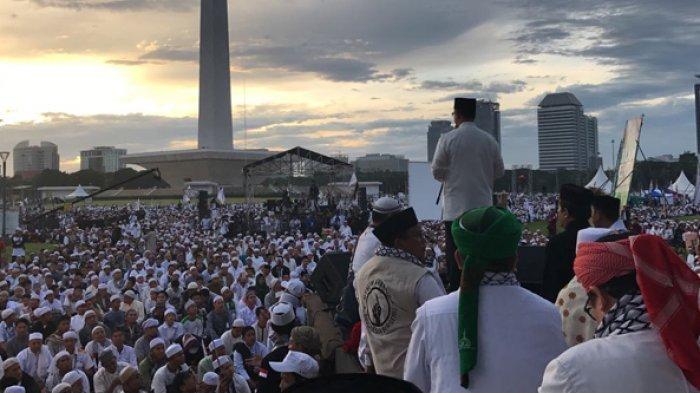 The 212 reunion was allegedly funded by banned mass organizations to spread influence and provoke the public to be hostile to the government. The action received criticism from various parties, so it should be canceled.

The 212 reunion seems to be still in progress, even though the urgency of this event is still being questioned. Muannas Alaidid, Executive Director of the Legal Mafia Eradication Committee (KPMH), revealed that the 212 Grand Reunion, which was planned to be held at Monas on December 2, 2021, was actually financed by a banned organization.

Muannas said the two banned organizations that supported the budget for the event were the Islamic Defenders Front (FPI) and Hizbut Tahrir Indonesia (HTI).

Because this activity is related to the two groups, Muannas believes that the 212 Alumni Brotherhood group will also suffer the same fate as FPI and HTI. Gradually, the group led by Slamet Ma’arif will also be disbanded.

Muannas said that FPI and HTI had officially disbanded. It is not impossible that in the future PA 212 will wither away and die on its own like the others. The 212 Reunion event has been opposed by various parties, one of which is the DKI Jakarta Provincial Government where this activity is considered to be able to trigger the transmission of Covid-19.

Muannas agrees with this. Then he invited Muslims not to waste their time attending the event. He emphasized that all of this is for the health and safety of all. The pandemic situation is not over yet. Don’t let the 212 Grand Reunion create a new cluster in the midst of today’s covid.

Meanwhile, Deputy Governor of DKI Jakarta, Ahmad Riza Patria, does not seem to agree with the plan for the 212 Reunion. He reminded that the pandemic conditions in Jakarta made the 212 Reunion activities impossible to hold.

He also reminded that Jakarta is not yet free from the pandemic even though it is included in the PPKM level 1 category. Riza also reminded that the conditions for Christmas 2021 and the new year of 2022 as well as a decrease in DKI level to level 1 could trigger additional cases. Therefore, Riza invites the public to stay at home despite the high vaccination rate.

Until now, PA 212 is still trying and insisting that the 212 Grand Reunion can be held in the Monas court.

Epidemiologist from Griffth University Dicky Budiman assessed that the government’s move to reject the implementation of the 212 Reunion was the right one. He is of origin, the public must avoid crowds so that Covid-19 cases do not spike again.

Spokesman for the Covid-19 Task Force, Wiku Adisasmito, has also reminded that large-scale activities must follow the rules and policies of the national government. He also reminded the procedures that must be followed according to the dynamic conditions of each region.

If you already know about this, of course the question arises, what is the motive for the 212 Reunion in 2021?

Lecturer of Political Communication at Telkom University, Dedi Kurnia Syah, said that the 212 Reunion was actually not important during the pandemic. In fact, he thinks that this activity will only cause problems.

He considered that the main purpose of the Reunion 212 action was an effort to show mass power. This is strongly suspected to be related to political motives by seeking partners for the sake of 2024. However, Dedi reminded that a mass movement will not be large without momentum.

Meanwhile, the Initiator of the National Conscience Movement (GNK). Habib Syakur bin Ali Mahdi Al Hamid considered that the PA 212 grand reunion plan should be suspected of having profit motives from certain parties for the existence of their group.

This figure who is also concerned about radical and intolerant issues suggested that the government does not need to be reactionary in responding to the PA 212 Reunion plan. Habib Syakur said Ngara should be a loyal listener and viewer, don’t want to follow what 212 wants.

The Indonesian people have known from the start that the PA 212 struggle is not a religious struggle, but a political struggle, because apart from aiming to overthrow Jokowi.

What is unfortunate about Reunion 212 is that millions of people are easily influenced by their propaganda that has political interests but is packaged nicely as if it were just an ordinary religious act. Of course, this proves that there are more and more conservative groups in Indonesia.

The agenda for the 212 Reunion which was planned to be held at Monas, of course, had to be cancelled, especially when the Monas Pandemic was closed more often.