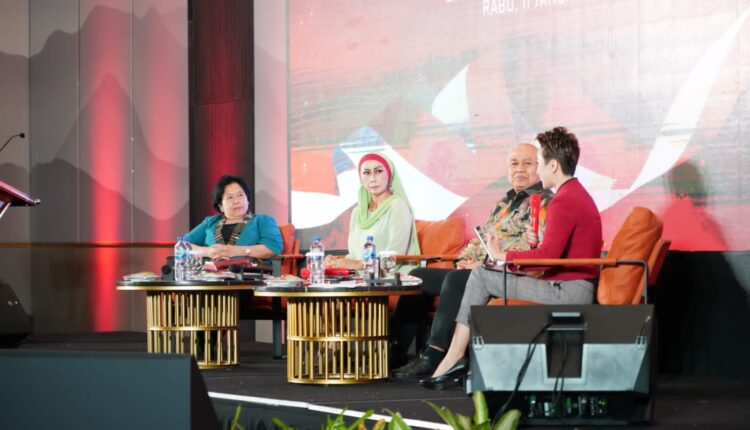 The event which was attended by around hundreds of people from various elements presented a Professor of Semarang State University (UNNES), Prof. Dr. H. R. Benny Riyanto, SH., M.Hum, Professor of Criminal Law at the University of Indonesia, Prof. Dr. Harkristuti Harkrisnowo, SH., MA., Ph.D, and General Chairperson of the Central Management Board of MAHUPIKI, Dr. Yenti Ganarsih, SH., MH.

“Of course we are proud because this is the work of the nation’s children from across generations and is able to become the standard of life for the nation and state,” he said.

Likewise, Prof. Yuliandri also believes that there has been a transformation of criminal law, because so far Indonesia has used the Criminal Code, a product of the colonial era.

“With the presence of Law No. 1/2023 on the Criminal Code is able to mark the history of Indonesian law on how we reform and renew national law,” he explained.

There have been many updates in the National Criminal Code (KUHP), according to the FH UI Professor because the Government of Indonesia wants to build a legal system that is much better than before.

At the socialization of the Criminal Code, Professor of Criminal Law at the Faculty of Law, University of Indonesia, Harkristuti Harkrisnowo said that actually Indonesian values are very different from those in Western countries, so that there is absolutely no comparison.

Meanwhile, the existence of Living Law in the National Criminal Code, according to him, is a tribute to indigenous and tribal peoples. However, when the living law was applied, there was a mistake by the community, so there was a deviation regarding the principle of legality, of course this is not true because all of them must have scientific evidence that these regulations are still being applied in society and regulated in regional regulations.

“It means that the state has strengthened the role of customary law in the life of the state. What is a concern is related to customary law sanctions which are often burdensome, so we limit fines according to certain categories, said the Professor of Criminal Law at the University of Indonesia.

Regarding the article on demonstrations causing riots in the National Criminal Code, it is stated that demonstrations that are not notified cannot be arrested at all, but will only be disbanded.

“However, if demonstrations occur without notification and cause riots, then they can be punished,” continued Prof. Harkristuti.

Still in the same event, Dr. Yenti Garnasih also said that there is an open and limited recodification of criminal law in the National Criminal Code, which makes it possible if there is an update, you don’t have to make a new law, but just insert it.

“In the National Criminal Code there have been several reforms and it has also embraced universal values, which have always existed until now. But there are things that are not in accordance with the updated Indonesian values, “concluded the Chairman of MAHUPIKI.

According to him, there are several advantages of the National Criminal Code because it is the formation of the nation’s children, all community stakeholders also play a role in it, with the aim of how the people of this country do not commit crimes.

Meanwhile, Prof. Dr. Benny Riyanto also explained that the old Dutch-era Criminal Code existed more than 100 years ago, but until now there has been no official translation, so many translations appear that have the potential to cause multiple interpretations. In addition, it does not yet reflect the nation’s cultural values, let alone reflect the basic state philosophy of Pancasila.

According to him, the Government has accommodated all input from stakeholders, from related ministries and institutions to the participation of all Indonesian people, including academics.

“Not only that, but a public hearing has also been held which has been carried out in accordance with the MK’s directions, namely meaningful participation, namely the right to be heard, the right to receive an explanation and the right to be considered,” said the UNNES Professor.

According to him, due to the large number of inputs from various points of view from the public, the National Criminal Code tries to find a middle way, for example with the existence of the Cohabitation Article which has the status of a complaint delict.

The urgency of replacing the old Criminal Code with the National Criminal Code is first because there has been a shift in the paradigm of justice, which used to use the paradigm of retributive justice, to become justice that is corrective for perpetrators, restorative for victims and rehabilitative for both victims and perpetrators. In addition, it is also a manifestation of reform of the legal system as a whole in accordance with national values and universal human rights.

The National Criminal Code Accommodates All Public Aspirations, Indonesian People Should Be Proud