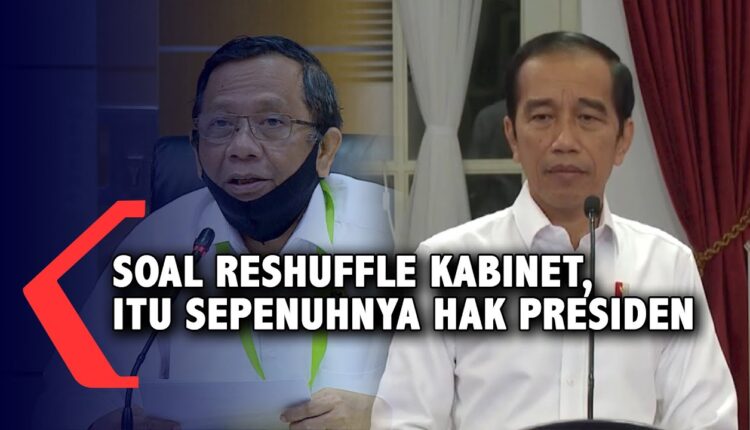 Reshuffle itself has the meaning of “reshuffling the cabinet”, reshuffle can also be interpreted as an activity to rotate or change the composition of the ministers in the cabinet. Usually a cabinet reshuffle is carried out by moving a minister from one position to another.

The reshuffle issue blew again after the ministry of education and culture was merged with the ministry of research and technology. As well as the proposal for the establishment of the Ministry of Investment was approved by the Indonesian Parliament .

Achmad Baidowi as Chairman of the PPP Central Leadership Council (DPP), stated that PPP as one of the coalition political parties supporting the government fully surrenders to President Jokowi to appoint a figure who will occupy the post of Minister of Education and Culture Research and Minister of Investment.

He also assessed that the cabinet reshuffle was a consequence of the change in the nomenclature of the ministries.

Meanwhile, Deputy Chairperson of the Gerindra Party Habiburokhman stated that a cabinet reshuffle was a natural thing and could be done at any time according to President Jokowi’s needs.

As a member of Commission III of the Indonesian Parliament, he stated that the Gerindra Party as a coalition political party supporting the government would support any steps Jokowi took regarding the cabinet reshuffle.

Meanwhile, Secretary General of the PDIP DPP Hasto Kristiyanto said that the reshuffle was Jokowi’s prerogative as President. As a party supporting the government, according to PDIP, it will be left to Jokowi.

On different occasions , Secretary General of the NasDem Party Johnny G. Plate said, there needs to be a cabinet reshuffle in the near future after the merger of the education and culture ministries with the research and technology ministries.

According to him, this cabinet reshuffle could have a limited or broader effect on other ministerial positions in the Advanced Indonesia cabinet.

The Minister of Communication and Information Technology said that the reshuffle was Jokowi’s prerogative as president. He emphasized that NasDem fully supports what Jokowi decided .

Even so, Johnny encouraged the reshuffle to be done as soon as possible. According to him, it would not be a problem if the cabinet changes were made this week.

He admitted that he did not know the exact time Jokowi would hold a reshuffle. He also did not know whether there would be a new minister’s name in the re-shake this time.

Previously, the Special Staff of the Indonesian Vice President Ma’ruf Amin in the Information and Communication Sector, Masduki Baidlowi, said that President Joko Widodo had invited Ma’ruf Amin to deliberate regarding the reshuffling of ministers or cabinet reshuffles.

It’s just that he cannot further unravel the issue of deliberation between Jokowi and Ma’ruf regarding the cabinet reshuffle.

Regarding this merger, the Vice President has given directions regarding employees in the two ministries . Moreover, personnel issues are the responsibility of Ma’ruf Amin as vice president.

Masduki views, related to the Ministry of Investment, this institution really needs to be created. However, he could not convey this in more detail i.

He emphasized that Jokowi has the right to reshuffle to replace his assistants in the cabinet. However, Ngabalin is reluctant to specify the names of the ministers who will be reshuffled.

The reshuffle is seen as a momentum to increase public confidence in President Jokowi’s administration.

Previously, Pelita Harapan University (UPH) Political Communication Expert, Emrus Sihombing, assessed that this reshuffle was not only a momentum, but also an entry point for evaluating all ministries.

Emrus also reminded that there are aspects that should not be forgotten, namely the aspect of loyalty. Do not get to the end of Jokowi’s administration, instead the ministers work independently.

He also said that if there was a reshuffle, what was clear was that the person had to be competent, capable, detailed and able to translate the president’s programs.

According to him, if ministers can translate presidential programs, there will no longer be a ministerial vision. Na mun, there is the vision of the President.

The ministers of course have a duty to work in line with the vision and mission of Jokowi – Ma’ruf Amin. Cabinet reshuffle is of course not a rigid policy, because Jokowi has previously reshuffled his cabinet in several ministerial posts such as the ministry of social affairs, ministry of religion, ministry of tourism and creative economy, etc.