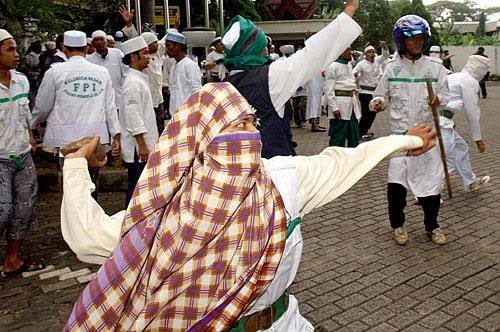 Jakarta Police said Use of Deadly Force was “measured”
In the early hours of a couple of weeks ago, Front Pembela Islam (FPI), a controversial militant Islamist group engaged in a deadly shootout with undercover police on a city highway, which led to the deaths of six of its hard-line members.

The six were “specially-trained” members of FPI, purported to be fanatic bodyguards of Indonesia’s most controversial Islamic cleric and ex-fugitive, Rizieq Shihab.

Jakarta Police Chief stated in a press conference, the incident took place after a police cars were attacked when they followed a vehicle believed to be transporticng Rizieq Shihab to an undisclosed location, resulting in a deadly shootout.

Rizieq Shihab was due to be investigated by police the next day for violating health protocols upon his return to Indonesia – after his self-imposed exile in Saudi Arabia.

Mass gatherings of his supporters at several locations including the airport and their headquarters at Petamburan violated Covid-19 health protocols, an offence that can be punishable by jail, where the virus has claimed more than 18,000 lives in the country.

In a press conference, police showcased two firearms and sharp weapons used in the incident. In an audio recording, Rizieq’s convoy attempted to engage in dangerous manoeuvres against police cars that were tailing them.

Believed to be outnumbered, police were forced to use deadly force in self-defence to respond to the armed attack.

With frequent run-ins with the law, the controversial figure seems to adopt a strategy of evading police investigations that could potentially lead to his eventual arrest.

Previously, Rizieq Shihab obstructed Bogor City officials from obtaining Covid-19 test results, after being admitted to a hospital from possibly contracting the virus.

Before Rizieq Shihab fled to Saudi Arabia in 2017, he was the figurehead of the hard-line 212 movement that opposed Jakarta’s former governor of Jakarta, Basuki Tjahaja Purnama, better known as Ahok, which ultimately lead to his arrest over accusation of blasphemy.