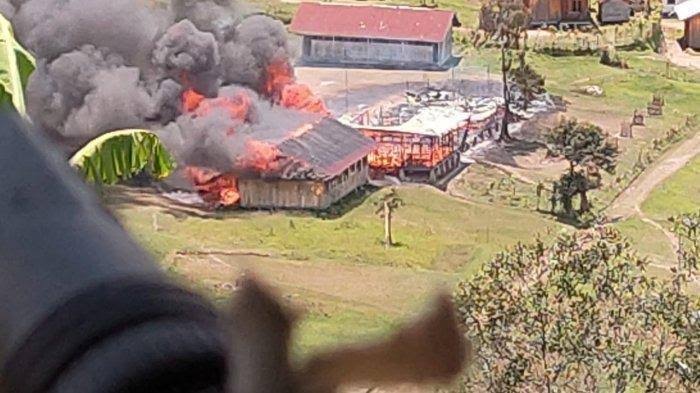 In May 2022, the Papuan Separatist and Terrorist Group (KST) again carried out a heinous act by burning down the teacher’s house and shooting the truck driver. The community condemned the cruelty of the KST gang which had caused casualties and created fear in the people.

One of the disturbing problems in Papua is the existence of KST. They demand independence and in the end it is the people who are the victims. Even though the victims were also Papuans, the public could not understand why KST would do such a thing to their own tribal brethren.

One of the horrendous events was the fire that occurred at the teacher’s housing in Ilaga, Papua on May 13, 2022 and the culprit turned out to be a KST member. The Head of Public Relations of the Papuan Police, Kombes Ahmad Musthofa Kamal, stated that members of the TNI at Pos 408 received information via HT that a teacher’s housing had been set on fire in Ilaga, Puncak Regency, precisely in Wako Village.

Kombes Ahmad Musthofa continued, the fire was successfully extinguished at 19:20 East Indonesia Time. Residents also helped to extinguish the fire. After a search was carried out by members of the Cartenz Peace Team, no signs of the KST members were found. In a sense, after burning they immediately ran helter-skelter.

The community condemned KST’s atrocities for daring to burn down the teachers’ housing. In fact, teaching is a very important profession because it can educate Papuan children. However, their house was burned down. It is not yet known how much material damage was borne, but it is clear that the teachers were sad because their homes were burned down by fire.

It is natural for people to be angry because this is not the first time this has happened. KST once killed teachers and students and burned down schools, as if they were anti-educational. In fact, education is very important for the future of Papua.

Apart from burning down the teachers’ housing, KST also demonstrated its cruelty by torturing a truck driver named Nober Palintin on May 11, 2022. The Deputy Chief of Public Relations of the Gakkum Operations for Peace in Cartenz AKBP Arif Irawan stated that Nober was previously kidnapped and then shot viciously in Gome District. Previously, the victim and his colleague AT were mining for sand, then pulled from the truck and taken to Ilaga until finally found dead.

KST’s atrocities are out of bounds as they kidnap an innocent truck driver. The motive for the shooting is not yet known, but it is suspected that Nober has nothing to do with KST. They are getting crazy because they kidnap and shoot carelessly, even though the victims have no negative intentions.

When KST becomes more violent, it is only natural that people criticize them. Many times, civilians have been victims of the atrocities of this rebel group. The reason is always the same: it is suspected that the victim is a spy from the security forces. Even though it was just slander because the victims were just ordinary civilians, but they were cruelly accused and lost their lives.

KST eradication was carried out intensively by the Cartenz Peace Task Force Team. KST must be removed from Indonesia, not only from Papua. The existence of KST continues to be detrimental because it burns teachers’ houses and shoots civilians ruthlessly. The Cartenz Peace Task Force team continues to conduct sweeps to remote areas of Papua to find out where the KST headquarters are, because there are many and widely spread bases.

KST continues to be criticized by Papuans and Indonesians alike for their violent actions by burning down teachers’ housing and kidnapping and killing truck drivers. Therefore, it is natural for KST to become a common enemy who deserves to be dealt with according to the applicable law.