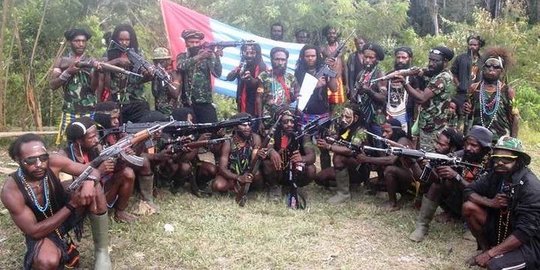 Papuan Separatists Do Not Get Public Sympathy

The Armed Separatist Criminal Group in Papua has shown increasingly heinous actions, how could they not, they again showed their arrogance by shooting some time ago. The Papuan separatist group did not get the sympathy of the original Papuans because their atrocities could not be justified.

The situation in Papua also got more heated at the end of the year due to acts of terror from the KKSB. Those affiliated with the Free Papua Movement (OPM) have deliberately done this as an annual tradition leading up to 1 December. Where the separatist group will go down the mountain and provoke Papuans, and do various ways so that their requests are fulfilled by the local government.

In fact, separatist groups such as KKSB fail to seek sympathy from the people in Tanah Papua, this is because they always act recklessly in carrying out actions. They have the heart to finish off their tribesmen, therefore it is natural that they are wanted by the authorities. Because its existence always worries Papuans, starting from those living in Merauke, Sorong to Mimika.

Recently, the terror action in Nduga carried out by KKSB killed 1 person. The death victim was named Yulius Watepo, a native Papuan. He was rushed to the hospital but his life could not be helped. Yulius’ death is certainly very sad, where KKSB was very cruel by shooting his own brother.

In the shooting, actually the target was the TNI Post for the Support Task Force Yonif PR 330 / TD Pasar Baru Kenyam, Nduga Regency. But unfortunately the victims are civilians. Many parties regretted this incident because KKSB was really cruel and dared to shoot unarmed people.

If KKSB was arrested, they would argue that Yulius was a civilian in plain clothes. However, those who are used to guerrillas certainly do not know the difference between officers in uniform and officers in disguise. So that blindly they immediately fired a bullet.

This shooting incident is apparently not the first act of terror. Previously there were motorcycle taxi drivers who were victims of KKSB atrocities. They also dared to shoot the construction workers who were in Intan Jaya. So that it recorded a record as an armed group that acted like thugs and was hated by indigenous Papuans.

When OPM celebrates its birthday, KKSB will also make all its advances to Papuans. They are trying to convince citizens to join forces to create a federal state for West Papua rather than joining Indonesia.

They think that Indonesia is a colonial country. However, the KKSB apparently did not know that the Papuan people were smarter so that they were not easily tempted by the persuasion of separatist groups, even though they had been lured by material.

The community, especially the Orang Asli Papua (OAP), have shown their attitude towards hating KKSB which has committed atrocities and misused village funds. In Intan Jaya, for example, village officials were proven to have used aid money to buy new weapons for KKSB. This mistake certainly cannot be tolerated, because someone in a position has been proven to be pro KKSB, even though he admits that he did this under threat.

The high sense of nationalism in the Papuan people made them refuse when invited to fly the Morning Star flag, nor did they want to lower the red and white flag.

Previously, West Papua Separatist Frontman Benny Wenda had also sought attention from the United Nations and Australia regarding the riots at Expo Waena and Wamena, Papua. Where about 27 people died in the riot.

Benny Wenda is the leader of the United Liberation Movement for West Papua (ULMWP) who was granted asylum in Oxford, England. In that city, he continues to campaign for independence for West Papua.

Benny claims that the Indonesian state has aimed to completely eliminate the peaceful struggle for self-determination, and imprison and kill high school teenagers and students.

In fact, the Indonesian government has deployed military and police forces to protect civilians and secure public facilities in Papua and West Papua.

The Papuan people are certainly getting smarter, where the problems in the land of Cenderawasih are still very complex, where these problems cannot be solved by separating themselves from Indonesia, but by means of deliberation to determine a common ground for solutions that can be applied for the advancement of the land of Papua.

#Papuan Separatists Do Not Get Public Sympathy
22
Share FacebookTwitterGoogle+WhatsAppEmailTelegramLINEBlackBerryPrint

The Job Creation Law Benefits the People and Small Entrepreneurs