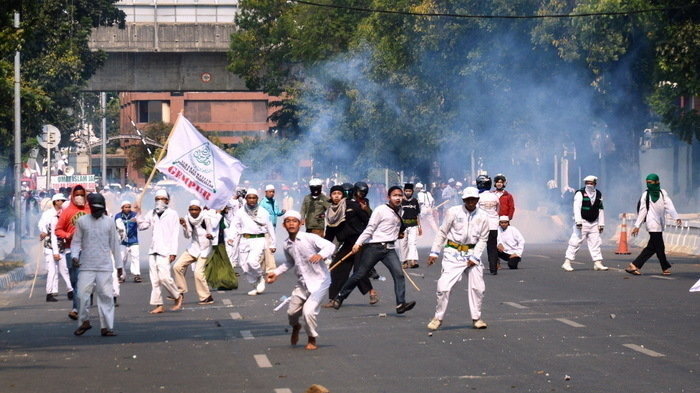 Support the Investigation of FPI Members Involved in Terrorists

By: Raavi Ramadhan) *
FPI is proven to have members who were betrayed by terrorist organizations. This finding is further supported by evidence that they have firearms and sharp weapons. The community supports Densus 88 and Polri to investigate this case. The goal is that they do not terrorize Indonesia and destroy peace in this country.
FPI is a mass organization that promises to unite people in Indonesia. But unfortunately they are using organization as a mode, to worsen peace and destroy unity in this country. The proof is that FPI often carries out sweeping without permission and lectures on the importance of the Caliphate. Even though the basis of the state cannot just be changed.
The name FPI as a terrorist organization is appropriate, because they are proven to have many members affected by terrorism cases. Head of the UI Center for Police Science Research and Terrorism Studies, Inspector General (Purn) Benny Mamoto, stated that 37 FPI members were proven terrorists. They are scattered throughout Indonesia, from Bantul, Lamongan, Solo, to Aceh.
Inspector General (ret.) Benny continued, the 37 FPI members involved in terrorism cases were arrested for carrying out bombing plans, making bombs, and detonating them in a public place. There are also FPI members who have become suspects for hiding other terrorist suspects. The announcement of the names of the 37 terrorists was the result of a court decision.
When there is an announcement of FPI members who are members of terrorists, the community considers it natural that the organization is disbanded. Because they committed a crime by detonating bombs and taking innocent lives. Terrorism is a heinous act that must be eradicated at its roots.
The community also supports Densus 88 to investigate the involvement of other FPI members and former members in terrorism cases. Because there may be members who have not been caught, even though they are involved in a terrorism case. It should be noted that what was arrested was not only the bomb maker and perpetrator, but also the protector. Because they hid the wrong people.
Investigation of this case has also been intensified, especially when there was a finding in the accounts of FPI and its affiliates that there were transfers from abroad. The money transferred has not yet been disclosed, from whom and for what purposes. However, this discovery can be linked to Rizieq Shihab’s video stating that he is pro ISIS, so that the public thinks this shipment is from ISIS.
Special Detachment 88 worked hard in dismantling the open terrorist network after confessions from FPI members. South Sulawesi Regional Police Chief Inspector General Merdisyam stated that members of the Makassar FPI who were involved in a terrorist network were also proven members of ISIS. They were betrayed by Abu Bakr Al Baghdadi in 2015.
Ahmad Aulia, one of the FPI members who took the allegiance, admitted that at the time of the incident, Munarman was the representative of the central FPI. This admission contradicts FPI’s statement that they are not terrorists. FPI was proven lying, because there were witnesses and evidence that proved that they were a terrorist organization.
Therefore, it is hoped that the community will not be pro-FPI and think they are victims. Due to the fact, it is precisely these mass organizations that carry out acts of violence, terrorism and radicalism. They are always playing the victim, thus deceiving the public in order to gain sympathy. Even though it is only a mode so that FPI’s wishes come true, to change the basis of the Indonesian state.
When dozens of FPI members were arrested for terrorism cases, their ulcers would show more. Because this mass organization is proven to be affiliated with terrorists. The public fully supports Densus 88 to continue investigating terrorism cases committed by FPI members and former members, so that life in Indonesia is peaceful without radicalism.