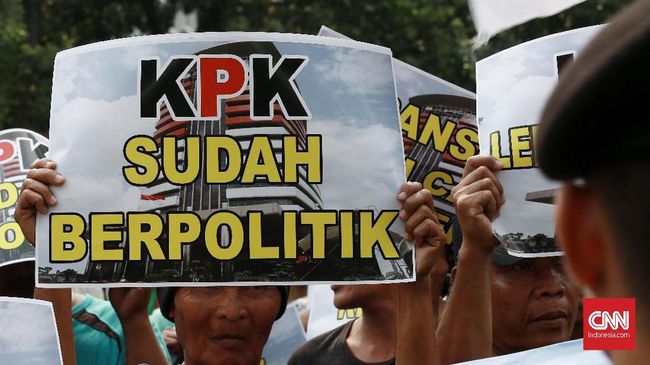 By: Aulia Hawa )*
Employees of the Corruption Eradication Commission (KPK) who did not pass the TWK were finally officially fired. This dismissal is expected to bring a new chapter and be able to end the polemic of the KPK which has been closing the institution’s hard work in eradicating corruption.
KPK is a state institution that has a noble mission because it was created to eliminate KKN in Indonesia. Therefore, it is relatively more popular than other state institutions. Especially when there is a polemic about the national insight test which is a requirement before an employee is appointed as ASN, it immediately creates a scene throughout Indonesia, because some do not pass.
Coordinating Minister for Political, Legal and Security Affairs Mahfud MD stated that the polemic about TKW KPK could be ended. The reason is because 56 KPK employees who did not pass the TWK have been recruited by the National Police Chief, General Listyo Sigit Prabowo (to become a National Police ASN), and have been approved by President Jokowi. Let’s move forward together together.
In a sense, we don’t have to make a fuss anymore because there has been a solution to the problem, because they are still ASN even though they are in other institutions. No more insinuating subtly or openly about TWK because it happened a long time ago, and 56 former KPK employees have found their anchorage. They did not become jobless because they were immediately appointed by the National Police Chief.
Mahfud continued, President Jokowi approved the request of the National Police Chief, referring to Article 3 paragraph 1 of government regulation number 17 of 2020 concerning changes to government regulation number 11 of 2017 concerning the management of civil servants. The article states that the President as the holder of the highest authority for the development of civil servants has the authority to determine the appointment, transfer and dismissal of civil servants.
If there is a green light from President Jokowi, the transfer will be smooth. The former KPK employees can work again even in different places. The polemic about TWK and them does not need to be discussed again, because a long time has passed, and there is a place for them to work.
Just end this polemic and there will be no more demonstrations, even volumes. The demonstrators, who are mostly students, should understand that if there is a decision by the Constitutional Court and the Supreme Court, then it is valid. When there is a transfer to the Police, it can be said that the problem has been resolved, so there is no need to prolong it.
The demonstration against TWK and all of its controversies is clearly prohibited because it is still a pandemic. Therefore, if there is another demonstration, don’t be angry if the officers immediately chased it away. The reason is because they prevent crowds and the formation of new corona clusters.
The polemic should not be extended, for fear it will affect the performance of the KPK. There is no need to be bombarded by news reports because of negative issues, because as good citizens, we should support the KPK and create a conducive situation.
Don’t do the opposite, ‘fry’ the TWK polemic and accuse all kinds of things, even though it has been declared over. Remember that the KPK is an institution to eradicate corruption. Let the employees think calmly so they can work smoothly.
We should support the KPK and stop the polemic about TWK. The reason is because life goes straight ahead, not backwards, right? Don’t mention the past because it will only destroy.
The KPK is an upright institution and will not fail because of the TWK polemic, however, do not extend it any further. The reason is because there is a solution and there is no need to discuss the polemic anymore. Let the KPK carry out its sacred duty to eradicate corruption, collusion and nepotism in Indonesia. I’m afraid that if the polemic is extended, it will have a psychological effect on them.

The Expansion of the Papua Region Involves the Papuan People