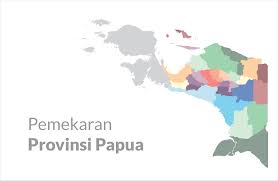 Papua will be divided into 6 provinces. This plan has also been approved by traditional leaders, so it remains only to implement it. When a province is expanded, there will be many positive and beneficial changes for the people of Earth of Cendrawasih .

The territory of Papua stretches across 312,224 KM2. In a place of this size there are only 2 provinces, namely Papua and West Papua. This is the result of regional expansion, because previously there was only 1 province, namely Papua (formerly Irian Jaya). In a place as big as Papua, the population is more than 3.3 million people. So, if there are only 2 provinces, they will have difficulty managing the administration to the provincial capital.

Distance is the biggest obstacle, for example if a Papuan is domiciled in Fakfak, then he has to travel 274 KM if he wants to go to Manokwari (capital of Papua province). Moreover, in Papua the area is not like in Java or Sumatra, because there are still many forests and mountains. So that long distances sometimes have to be traveled by small planes which are not cheap.

Therefore, the government will divide Papua into 6 provinces, namely West Papua, Southwest Papua, Central Papua, South Papua, and Tabi Saireri. So if you will take care of the administration will be closer. This was stated by the Minister of Home Affairs, Tito Karnavian. According to Tito, this decision is not final because there are still revisions and it depends on the government’s financial capacity.

The expansion of the territory has not yet been fixed when it will be continued, but it has been 100% approved by traditional leaders in Papua. The traditional leader of Tabi Ondofolo, Yanto Eluay, stated that he supports the government’s plan to expand the territory on Earth of Cendrawasih. The reason is because this program is to promote and prosper the people on Earth of Cendrawasih.

Support from traditional Papuan leaders is very valuable, because any changes in Papua must be approved by them and also members of the MRP (Papuan People’s Assembly). Since Otsus volume 1 was implemented in 2001, the voices of the Papuan people have been heard more.

The central government has changed the decentralized system so that it is hoped that all Indonesian citizens in remote areas will be more advanced, because they can work together to develop their own territory. Including the people of Papua. They were given the right to voice in the regional expansion project, and were represented by the MRP.

The Papuan people support regional expansion, in accordance with Ondofolo Yanto Eluay’s recommendation, because they feel this program will advance the Earth of Cendrawasih region. In addition to bringing it closer to administrative matters, regional expansion will even out modernity in Papua.

So, areas in Papua that have developed are not only in big cities like Jayapura and Merauke, but modernity is also evenly distributed to Fakfak, Nabire, Sorong, Yahukimo, etc. If there are more provinces in Bumi Cendrawasih, more APBD funds will also be channeled by the central government, so that people will be free from status below the poverty line.

The expansion of the Papua region is very useful, both for local governments and for civilians. Residents will benefit from APBD funds and they are also closer if they will take care of administration and important papers to the provincial capital. The whole community and traditional leaders support the expansion of the region because it will be very useful for Papua.