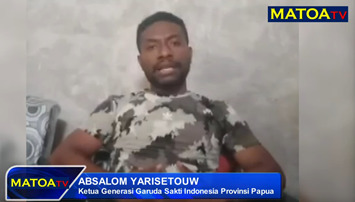 Absalom Yarisetouw: KST Papua Must Be Followed Firmly So that Papua is Safe and Development Runs Smoothly

Jayapura, CIDISS.CO – The chairman of the Generation of Garuda Sakti Indonesia, Papua Province, Absalom Yarisetouw, said that security forces must be able to enforce the law and take firm action against the Papuan Separatist and Terrorist Group (KST Papua) in order to make Papua safe, peaceful and secure.

KST Papua has always made the Papuan people nervous, especially the residents in the mountains, they want to stay calm but with the Papuan Separatist Terrorist Group they become restless and feel insecure because there were brutal actions carried out by KST Papua by shooting civilians so that they had to flee and run from their homes, said Absalom Yarisetouw during an interview with the Matoa TV coverage team in Jayapura Regency, Papua, Thursday (12/1/2023).

With law enforcement by security forces from both the TNI and Polri against Papua KST, the people in the mountains can return to their activities safely and peacefully, hopes the Chairman of Generation Garuda Sakti Indonesia, Papua Province.

Absalom Yarisetouw acknowledged that the heinous actions carried out by KST Papua against civilians, including workers carrying out infrastructure development, resulted in obstacles to development in Cendrawasih Land, resulting in development gaps in coastal and mountainous areas.

KST Papua often disrupts infrastructure development in the mountainous region of Papua, which has the effect of delaying or stopping a number of infrastructures that should have been built, said Absalom.

KST Papua must be disbanded immediately so that infrastructure development in Papua can be carried out smoothly and under control, especially in the mountainous region of Papua, said Absalom Yarisetouw, chairman of the Generation of Garuda Sakti Indonesia, Papua Province.

The Criminal Code Responds to Existing Developments in Society