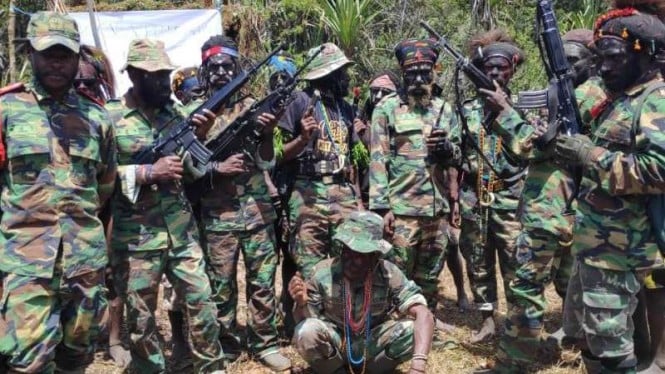 The Separatist and Terrorist Group (KST) needs to be eradicated because it has committed a series of crimes that have threatened the lives of other people. The Papuan people also support firm action against the group so that security and stability in Papua can be realized and development can continue.

The community supports the eradication of KST because they have damaged peace in Papua. Especially when they carried out successive attacks in Oksibil, Gunung Bintang, Papua.

On January 7, 2023, KST attacked a motorcycle taxi driver in Oksibil. He then reported to the authorities and the police came to carry out security. After that KST and the security forces exchanged fire and there were 3 injured victims from the security forces.

KST always accuses civilians of being spies for the security forces, and it is possible that the motorcycle taxi driver is also suspected of being an intelligence agent. Even though he was just an ordinary person. Luckily the motorcycle taxi driver survived the attack and then reported it to the police station. It is hoped that other residents will also do the same so that there will always be peace in Papua.

The Papuan people certainly want their area to be safe and peaceful. Especially now that they are actively promoting Papua as a new exotic tourist spot. However, the presence of KST could frighten tourists, so this separatist group must be eradicated. Especially when they continue to terrorize the people, especially in Oksibil.

Meanwhile, on January 9 2023, KST also carried out an attack and arson at a SMK in Oksibil. The Head of the Public Relations Division of the Papua Police, Kombes Ignatius Benny Ady Prabowo, stated that KST had set fire to the school. In that incident there were no casualties but teaching and learning activities were temporarily suspended.

The KST terror in Oksibil was spontaneously criticized by the public. Moreover, the burning of schools is not for the first time. In 2022, they also set fire to a school in the Hitadipa District, Intan Jaya Regency. Apart from setting fire, at that time they also mistreated a teacher.

Data from the Papua Regional Police, throughout 2022 there were 53 fatalities due to KST attacks. They consist of civilians and security forces. This was stated by the Papua Police Chief Inspector General Mathius D Fahiri.

Therefore, if you want Papua to be safe and peaceful, KST must be completely eradicated. They were desperate to attack the security forces. Even though the security forces are friends of the people and are tasked with protecting the people of Papua. However, KST is considered as an enemy and invader.

To free Papua, KST carried out various terror acts, ranging from propaganda, threats, to shootings. KST is very arrogant to the point of underestimating the strength of the security guards in Papua.

The eradication of KST is the focus of TNI and Polri soldiers who are members of the Cartenz Peace Task Force. The focus of the Task Force is not only to maintain the security of the Papuan people, but also to create peace in the Cendrawasih Land. Don’t let the people get scared because of KST’s actions.

KST was eradicated because it disturbed the peace and damaged the country’s sovereignty. The Unitary State of the Republic of Indonesia is fixed, so that when there is a group that wants to become independent from Indonesia, it must be eradicated from its roots. The sweeping continues into the wilderness and mountains, because KST often hides there.

Meanwhile, the Chief of the Puncak District, Abelom Kogoya, criticized the successive KST attacks in Oksibil for undermining peace throughout Papua. He also refused the arrival of KST in his area. Abelom does not want an armed conflict in Puncak Regency. Especially after there was an attack and caused eight residents to die. Abelom attended the funeral of one of the victims, Beby Tabuni, and strongly criticized the KST attack.

As a tribal chief, Abelom rejected KST because he had the heart to kill his people. KST is indiscriminate in attacking. Both migrants and native Papuans can be attacked with firearms and cause casualties. Apart from that they also often take the assets and food of the Papuan people so that their actions are considered criminal acts.

Peace in Papua must be maintained and how to eradicate KST. Do not let any more civilians or security forces become victims of the separatist group’s attacks. The Papuan people have always supported the apparatus who are members of the Cartenz Peace Task Force, to create security and peace throughout the Cendrawasih Land.