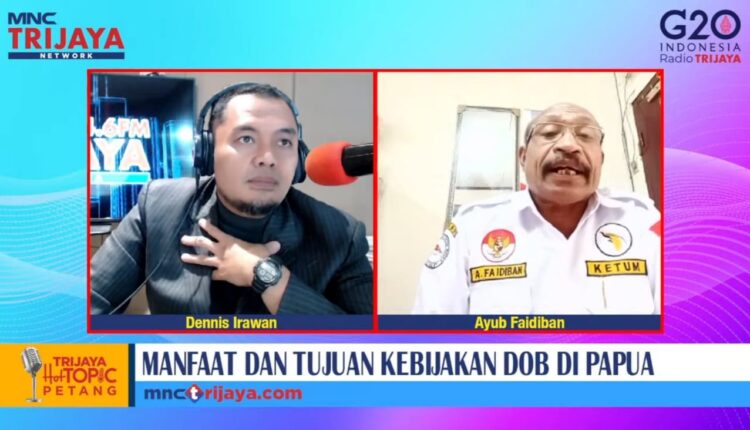 IKBP Optimistic that DOB Can Advance Papua Like Jakarta

JAKARTA, cidiss.co – The Papuan Family Association (IKBP) is optimistic that the New Autonomous Region (DOB) policy will bring progress in Cenderawasih. This progress is even equivalent to progress in Jakarta.

“I am very optimistic. Because I see the current government. I am sure that Papua will be the same as other regions,” said Chairperson of the Papuan Family Association (IKBP) Ayub Faidiban in the Trijaya Hot Topic Evening dialogue, Monday (18 July 2022).

Ayub said that development in Papua has been hit by geographical problems. The vast terrain of Papua with mountains and plains, uneven development. With the new autonomous regions, areas that have been difficult to pass due to poor access, development will automatically proceed.

Ayub added that the new autonomous regions are actually the aspirations of the Papuan people. The proposal for expansion was submitted 20 years ago, namely since the division of Papua and West Papua. However, the expansion was only accommodated in the era of President Joko Widodo. Therefore, when the proposal was followed up, the Papuan people expressed their gratitude.

“When Papua was divided into two, West Papua and Papua, at that time everyone asked for it to be divided. Want Central Papua, South Papua, and others. It was never accommodated and followed up at that time. Today we are grateful, without being asked This is given,” he said.

Ayub admits that there are still groups that reject DOB. However, he did not know the reason for refusing DOB. Because when they met and were asked the reason for the refusal, the group did not answer. Ayub is worried that the rejection of the new autonomous regions will become a political sphere that is used to disrupt the government’s good intentions towards the Papuan people.

Ayub suggested that the group against DOB should stop this move. He then invited the group to support the government.

“So that everything can run optimally for the interests of each region and for the benefit of us Papuans. Papua can be well developed, the economy grows, and development is more intense. We also feel that and the same area in Jakarta, so there is no need to If we go to Jakarta in Papua, we can already feel when it is the same as other areas,” he said.