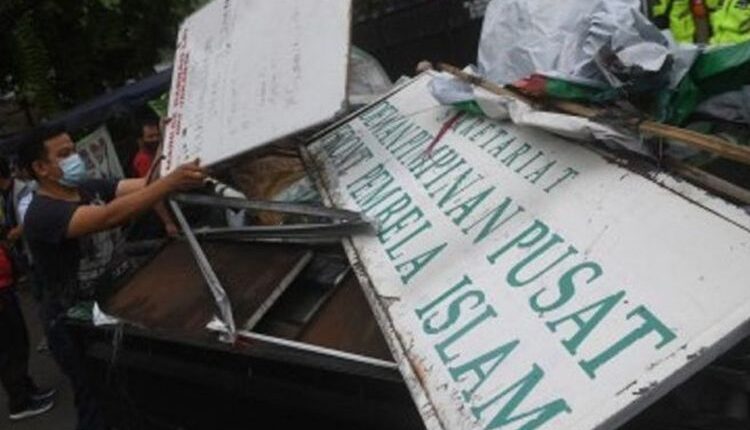 The floods that hit Jakarta and its surroundings made many people come to help the victims. One of the mass organizations that is volunteering is FPI. They helped but while wearing clothes with the words FPI on it, the officers reprimanded them. The wearing of all FPI attributes, including clothing, is strictly prohibited. Because it is a prohibited mass organization.

FPI has been declared a banned organization by the government, at the end of 2020. The dissolution of this mass organization is based on a 6 ministerial decree, so the legal umbrella is clear. After being disbanded, all FPI activities may not be carried out, including installing flags, billboards, and pictures bearing the FPI logo.

This prohibition was ignored by 10 FPI Jakarta members. S aat they’re so volunteers floods in Cipinang Melayu, East Jakarta, still wearing clothes and equipment bearing the FPI. So that he was rebuked harshly and then disbanded.

Kompol Saiful Anwar explained that the volunteer team was disbanded because they still used FPI attributes. Meanwhile, currently every FPI activity is prohibited, because it is a mass organization that was dissolved by the government. What is at issue is its attributes. If they still want to volunteer, they must change into other clothes, without FPI frills.

Kompol Saiful Anwar continued that when he was reprimanded, the ten FPI members understood and immediately changed their clothes. In a sense, this problem has been resolved properly and should not be twisted. So it seems that not everyone can volunteer. This is because the problem is the FPI logo on the clothes they are wearing, not the people.

The community also understands that the police carry out their duty to protect residents’ safety during floods. The authorities did not act arrogantly by reprimanding FPI members, but only carried out the regulations. If there is a mass organization that has been banned by the government, then automatically each of its activities can be disbanded, even though at that time evacuating flood victims.

Sugito Atmo, a member of the FPI Legal Protection Team, stated that the one who was recruited to become a Jakarta flood volunteer was neo FPI. However, they forgot and still wore the old FPI logo on. So that after yesterday’s incident, he immediately evaluated and prohibited Neo FPI members from wearing old uniforms. In a sense, he also realized his mistake.

Apart from that, don’t let Neo FPI act like the old FPI who likes to do sweeps on their own. Even though they are not officers, so they cannot do it without official permission. The thuggery committed by FPI has exceeded the limit, so that the community is angry. So they were even happy when the government disbanded FPI.

Nor should the prohibition of the FPI attribute be seen as an extreme thing. If the organization is dissolved, it is only natural that each attribute is prohibited, even if it is only a small logo on a t-shirt. People should not even be consumed by hoaxes and say that the authorities are unfair because there are people who want to help but are rejected, because the problem is the attribute.

When there are FPI volunteers helping flood victims, they must know themselves and remember that their mass organizations are prohibited from operating in Indonesia, even though their activities are in the social sector. Jan gan wears a shirt, an inflatable boat, and everything else bearing the FPI logo. Because each FPI attribute cannot be worn or posted in public places.