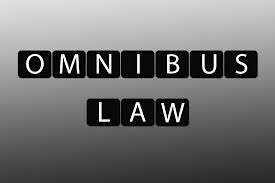 The government has formulated the Vision of a Forward Indonesia 2045 as a strategic step to make Indonesia the top five world economic power by 2045. To make this happen, the government expects a wave of investment to accelerate the development process. However, there are still overlaps and disharmony of sectoral laws which are the main obstacles to creating a friendly investment climate for investors. On this basis, the government considers the need for deregulation and debureaucracy.

Many laws and regulations want to be trimmed, amended, even if necessary to create new norms that did not exist before, so that a law that regulates everything as a whole is formed, and this has become what we know as the Omnibus Law. The Omnibus Law is expected to create a friendly investment climate through simplification of licensing steps, ease of requirements, and accelerated processes for business players, both domestic and foreign, in Indonesia.

However, there are still many parties who feel that the Omnibus Law is an error that needs to be ratified. This can be seen from the massive demonstrations against the Omnibus Law that occurred in a number of regions, especially welcoming the state speech made by the President of the Republic of Indonesia on August 14, 2020. The masses who refused to judge the Omnibus Law would be a rule that decreases the welfare of workers, and allows employers to easily dismiss workers without being granted benefits.