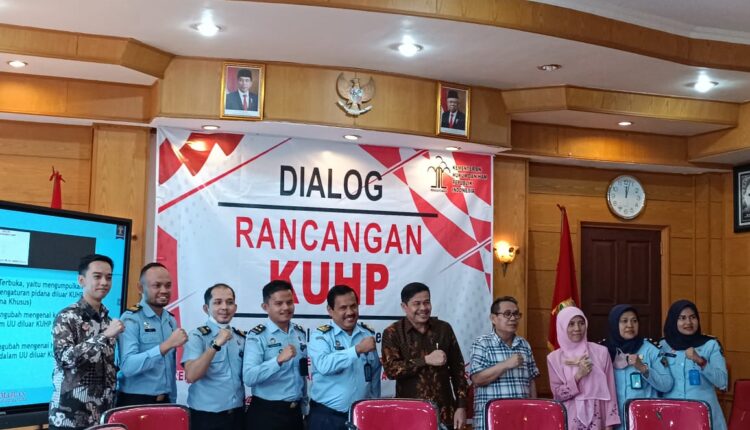 The ratification  of  the Draft Criminal Law  (RKUHP) requires the support of all Indonesian people, because later it will be useful to regulate how the nation and state life is. For this reason, the netting of input from the people continues to be intensified by the government until now.

The head of the Ministry of Law and Human Rights of Central Kalimantan, Hendra Ekaputra, explained that related to socialization and input networking, he had done it on several occasions involving many OBHs. It is not enough to get there, the plan is that in early November, his party will also hold another RKUHP socialization at Palangka Raya University (UPR) in the framework of a work program entitled ‘Kumham Goes To Campus’.

Meanwhile, the Head of the Legal and Human Rights Services Division, Regional Office of the Ministry of Law and Human Rights of Central Kalimantan, Arfan Faiz Muhlizi also added that the socializationcarried out by involving various targets was indeed aimed at being able to collect many suggestions and input from various circles of society.

For the rest, it will also be able to provide explanations to the wider community about the entire content of the material content compiled in the RKUHP so that the community itself can understand and play an active role in assisting the government, especially the Ministry of Law and Human Rights in carrying out tasks in the preparation of laws and regulations.

The support of the entire community to the RKUHP is indeed very important, because the RKUHP itself is part of the spirit of change to the old Criminal Code of the Dutch colonial heritage so it is very important to be changed immediately if you want to continue to have a legal system in Indonesia that is relevant to the development of the times at  this time.

How not, indeed with the dynamics of this very rapid development of society, if it continues to implement the legal system published hundreds of years ago, of course, there will be very many irrelevances obtained including multi-interpretations because of the many translated versions of the old Criminal Code.

So to be able to adjust when there is a development of community dynamics, there is absolutely no reason lagi to refuse the ratification of the criminal code as a substitute for the old criminal code. Not only that, but the RKUHP itself is the original arrangement of the nation’s children which certainly brings the spirit and philosophical life of the indigenous people of the country.

One of the strategies of the government in the context of socializing the RKUHP also involves Functional Officers of Legal Extension Officers in socialization to the community. The reason is that President Jokowi himself has given strict directions so that how the entire community can understand the substance and get the same opportunity to be able to provide their inputs.

Deputy Minister of Law and Human Rights of the Republic of Indonesia, Prof. Eddy OS Hiariej stated that since its preparation, the RKUHP has indeed continued to provide accommodation regarding various inputs and also community suggestions, all of which can be proven from the Problem Inventory List (DIM) which has reached more than 6 thousand in number. Even the involvement of community elements themselves has been carried out by the government since long ago, namely since the start of preparation.

On the same occasion, the Head of the National Legal Development Agency (BPHN) of the Ministry of Law and Human Rights of the Republic of Indonesia, Prof. Widodo Ekatjahjana, said that the Functional Officer of the Legal Extension Officer must take a good role. This is because there is a bias of understanding that occurs in the middle of the community regarding the efforts of the government and the HOUSE of Representatives in giving birth to the national Criminal Code which has been dreamed of for decades. The public discourse space actually presents many parties who do not have the capacity to comment on the bill so that people’s understanding becomes distorted.

The amount of news in the publication that circulates, but in no way comes from those who are competent, which is one of the reasons why there continue to be pros and cons until it seems as if all information about the RKUHP is always presented with full confusion. On the other hand, the government actually continues to open a space for dialogue and discussion as wide as possible so that all elements of society can participate.

Actually, the RKUHP has very significant advantages when compared to the old Criminal Code. Accordingto academics at the University of Indonesia, Dr. Surastini Fitriasih, that there are regulations that not only provide strictness, but also the enforcement of justice in the law in Indonesia, one of which is the existence of alternative sanctions for perpetrators of criminal offenses.

With various kinds of socialization programs and also public dialogues representedby the Ministry of Law and Human Rights, it is hoped that it can open insights, understanding and understanding of all crucial issues that are developing in the community regarding RKUHP information. Therefore, even today, efforts to capture community input are also still being opened very widely by the government.