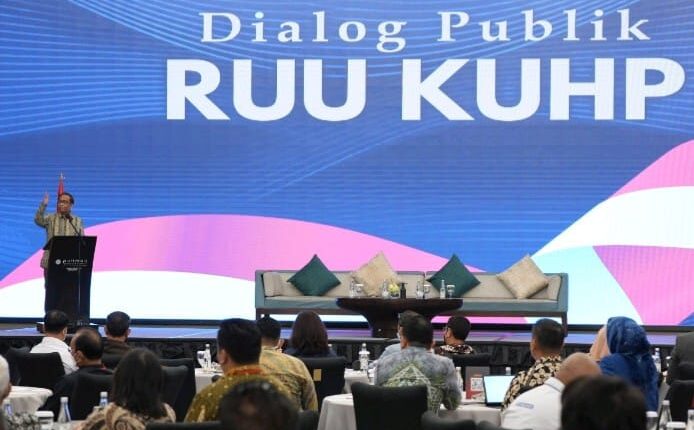 The government continues to refine the Draft Criminal Code (RKUHP). The existence of the RKUHP is also expected to be able to realize the modern legal paradigm and replace the existing KUHP which is a legal product of colonial heritage.

Things are bound to change, especially on the road today when the world is becoming so digital that it makes information very easy and abundantly available to access. So of course it will bring change to a society, it is undeniable that it also includes Indonesia.

When the social world changes so rapidly and rapidly, it should also be accompanied by adjustments or changes to the legal system. In modern times like today, the need for law should be adapted to follow how society runs.

The reason is, when the legal system that is available and enforced turns out to be completely irrelevant to the changing needs of modern times, then of course to implement it will be very imposing, and also the main purpose of the implementation of the legal system to uphold justice will also be questionable.

When a legal system in force is completely irrelevant, such as the use of the old Criminal Code in Indonesia, which is a relic of the Dutch colonial era, in it many things are already very less relevant when faced with the realities of the social world in modern times like today. So that not only will it be difficult to enforce justice, but it will also have the potential to give rise to many diverse interpretations.

Even though so far Indonesia has continued to be introduced as a state of law, which means the existence of a legal system is very crucial because it will affect all aspects of life in the fields of society, nationality, and statehood. So that all of that, even including how the government runs must be in accordance with applicable law.

However, when it comes to actually realizing a legal state that is ideal and in accordance with the ideological foundation of the country, namely Pancasila, in fact, it has several challenges that must be resolved. Deputy Minister of Law and Human Rights, Eddy Omar Sharif Hiariej stated that the national legal system must be harmonious, synergistic, comprehensive, and dynamic, through legal development efforts.

Therefore, the Government is currently continuing to strive to achieve this goal, namely with the legal development process currently being implemented, especially in the field of criminal law, by revising the Criminal Code (RUU KUHP).

Eddy added that the Criminal Code Bill was one of the government’s efforts to formulate a national criminal law recode system aimed at replacing the old Criminal Code as a legal product of the Dutch East Indies colonial era. The replacement of the old Dutch KUHP legal products is no less important because it creates relevance to adapt to the changing times.

The reason is, if the dynamics of society continue to develop, but are not accompanied by the development of criminal law, it will certainly make Indonesia not immediately have sovereignty in regulating its own authentic legal system. For this reason, it is necessary to immediately update and revise the Criminal Code.

In addition to the re-codification which includes the consolidation and synchronization of criminal law regulations, the renewal of the Criminal Code Bill is also directed as an effort to harmonization, namely by adapting the Criminal Code to the development of universal criminal law and modernization efforts, namely by changing the classical philosophy of retaliation that is oriented towards mere acts, into an integrative philosophy that pays attention to aspects of the act, the perpetrator, and the victim of a crime.

Wamenkumham Eddy explained that the existence of this Draft Criminal Code can produce a national criminal law with a modern paradigm, no longer based on retributive justice, but oriented towards corrective, restorative and rehabilitative justice. How not, because the legal paradigm that continues to be oriented towards retributive justice will certainly be very difficult if it is forced to be carried out in modern times.

The government’s efforts in making the relevance of the legal system in accordance with the modern life of society must be appreciated as high as possible, especially by continuing to open up discussion spaces with various elements of society to gather input, equalize perceptions, and as a responsibility for the process of forming laws and regulations which are carried out transparently and in a transparent manner. involve the community.

Meanwhile, the Head of the National Legal Development Agency, Prof. Benny Riyanto said that the public discussion regarding the discussion of the drafting of the RKUHP is very important to do, because it is expected to explain

The Map of Indonesia’s Investment Opportunities is Getting Wider